If you missed out on yesterday’s interview with Author Clinton Festa, get over there! 🙂 Today he’s sharing an excerpt with us, plus giving away a copy of Ancient Canada! 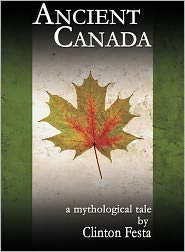 “Ancient Canada is a fantasy epic and a story of mythology for an alternate Canada. Because of her unique ability to see life and death, Lavender is exiled from her home. With the help of her sister Marigold, she survives in the wild using her gift. The two encounter various characters and creatures along their journey, not all human and not all friendly. Each chapter is narrated by one of these characters or creatures, sharing their personal story as well as their encounter of the two sisters. Together the chapters link to bring Lavender and Marigold’s epic, the mythological story of Ancient Canada.”

It had happened. Simon had seen his second child.

Quietly and peacefully, she opened her eyes, quite soon after birth. Perhaps the brilliance of the sky overhead opened her eyes itself, and if so, it was our first indication that she had the ability of sight.

“I’ve never seen that color before,” said the medic.

“Nor I,” said Simon. “They are clear, not even murky, as Marigold’s when she was first born.”

“Are those truly purple eyes, or is that just an effect of the Lights?”

“No, they are genuinely purple. Or maybe a sort of violet.”

“Or maybe Lavender,” spoke Simon. Once I told him what the peddler had said earlier, about the lavender I traded from him, we agreed on her name. I did not expect the color to be her permanent shade, but to this day they are identical to when she first opened them.

Clinton Festa, raised in Rockland County, NY, is son to two educators and grandson to four. Clinton studied animal science with the intention of pursuing a doctorate in veterinary medicine. However, after graduation Clinton began flight training and has worked in aviation for the last ten years.

As promised, Clinton Festa is offering eCopies of his book today! To enter, leave a comment along with your email.

Don’t miss the other stops on the tour!