It took me a bit longer to get through this book. I have to admit; I haven’t developed a taste for middle school books yet. I picked up this book because I wanted to see what’s happening in the younger world. I’ve been working a lot with children lately (grade 3-5) and wanted to get an idea of what interests them. Apparently, The Boy from Tomorrow is of some interest to children. I mentioned it in a 4th or 5th grade class I was visiting last week and they seemed all sorts of excited about it. I don’t know how the kids heard about the book, but pretty cool they’re watching for it to come out. Before I get into the review, how about the blurb? 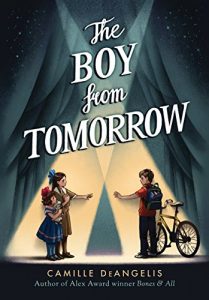 Josie and Alec both live at 444 Sparrow Street. They sleep in the same room, but they’ve never laid eyes on each other. They are twelve years old and a hundred years apart.

The children meet through a hand-painted talking board—Josie in 1915, Alec in 2015—and form a friendship across the century that separates them. But a chain of events leave Josie and her little sister Cass trapped in the house and afraid for their safety, and Alec must find out what’s going to happen to them.

Can he help them change their future when it’s already past?

The description seemed interesting enough. After all, I do have a thing for paranormal fiction. It wasn’t exactly the type of paranormal I thought it’d be. It was more like the psychic paranormal versus the shapeshifters, vampires, and occasional witches I’m used to.

I don’t know what’s typical of a middle grade book. However, I found the pacing to be very steady. I’m used to the edge of your seat kind of excitement. This one concentrated a lot on the every day lives of the character. It makes me wonder if this would be classified as literary fiction, another genre I’m less familiar with.

Another thing I found fascinating about this book is the vocabulary. Often times I think vocabulary for children’s books should be simple and easy to understand. However, I found quite a few words in the book that even I had to look up. I wouldn’t save I have out-of-this-world vocabulary knowledge, but I think my vocabulary is pretty decent. I liked it, but also wonder how difficult it’ll be for children. Since I’ve been working with younger children, I often marvel over the words that are unfamiliar to them. In a day of school, I can easily find myself answering the question “What does that word mean?” when simply expressing myself in what I’d think are simple sentences. But then again, I am in Nevada. From what I hear, we have the worst schools in America. 🙂

On with the plot! As I mentioned, the plot was steady. Not slow, not fast… it just progressed. It was interesting enough for me to continue. However, the book didn’t really engross me until about halfway in. What I did like about the storyline is it didn’t shy away from the subject of abuse. The abuse wasn’t raw or even cringe worth (in my opinion). Rather it was presented in a way that I think some children, especially those who might be neglected or experience a bit of cruelty might question is the abuse is deserving or not. I liked that, because there are children out there who aren’t treat right and don’t have an example of what “normal” should be. The other showed a type of abuse that might be on the subtle side for some children. Then she clearly identified it as wrong. She set clear boundaries and an example of what a “normal” parent-child relations might look like.

The author also did away with the nuclear family, both in the 1915 story and the 2015 story. These days it seems such a rarity to find a nuclear family in their first marriage. Not that I wish to see more divorces, widows, or widowers. However, it’s nice to see the less than perfect nuclear family in a book. It makes it relatable to so many children.

Finally, the book finished strong. Camille DeAngelis did an excellent job bring the characters full circle. When the book ended, I felt satisfied. All the pieces were nicely wrapped up and brought to a conclusion. Often times writers leave me with questions… I wonder what happened with… Not this time. I can’t even imagine there being a sequel with how well the author tied the ends together.

Character wise. Alec had a pretty strong personality. I’m not sure how kids typically are at his age (12). However, he definitely knew how he wanted to be treated. He had boundaries. He also had clear expectations on the way others should be treated. That’s not to say he didn’t behave like a child. To show he was a child, he acted out a few times. I don’t recall him having any consequences for his actions though. It didn’t make him seem spoiled, or anything like that. However, it gave me the impression he lacked boundaries for his own behavior. Other than how he should be treated, I wonder if he did have a sense of right or wrong about the way he should behave, like not running away from his father.

I thought Josie, the other main character, was very realistic in her portrayal. She behaved the way I think children behave. Though she was mistreated by her mother, she still followed directions the way children do. With the rules being so different in 1915 than they are today, even the side characters seemed realistic in their behaviors. I could see neglect being overlooked more readily in that time. Truly, I was more on board with the 1915 story line than the 2015 one. Whereas as the adult seemed overly tolerant and accepting of pretty much everything in 2015, the adults in 1915 seemed to work within what was allowable for the time.

Overall, I think the book progressed nicely, but I can’t say it was overly exciting. It wasn’t a bad read for my first middle-school chapter book. I’d give it a 3.5 out of 5.

I received a free copy of this book on Netgalley.

Selection Process: I chose this book because it looked better than all the other ones and looked through the pages it looked better, so I chose Grumpy Cat. The pictures, the artwork, and the word, showed you the history of Grumpy Cat. I also liked that there are games that looked fun and hard.

A bluebird serenades you from a nearby brook, keeping time to the musical babble of the brook that flows through the forest…
…and it poops on you. When you look up, it poops again. In your eye.

Question for the Author: Why are you grumpy?

Selection Process: I never really got into the Grumpy Cat meme. To be honest, I was a bit bummed my son chose such a long book about Grumpy Cat to read. However, I settled into it. The things a mother does for her child…

Thoughts: This particular book has a wide range for reading levels: Grades 3-12. For my 4th grader, this book provided quite a learning opportunities. It included some challenging words: resemblance, biological, optimistic, simultaneously, sullen, demotivational, inspiration, appendectomy, to name a few. Not only were they challenging for him to say, some of the words my son had never heard before, which required an explanation. If you’re looking to help your child expand his/her vocabulary, this may present an opportunity.

This book reminds me of the new disney movies, which are targeted at kids but have adult nuances in them that are above many children’s heads. For those who enjoy reading books with your kids, you might find plenty of jokes and entertainment in this book. In fact, the book reminds me of demotivational posters… but for kids.

If you like snarky and/or Grumpy Cat, this book might just be your thing. I definitely can see why the age range spans so greatly. Grumpy Cat being such a recognized meme, it’ll appeal to younger kids. Though I think the designation in terms of reading levels could have been better defined.

My son and I read this together in about 20 minutes.