I hopped right into Thumped after reading Bumped. I was happy to see my local library had a digital copy, which I’m finding very convenient these days… and easy on the pocketbook. Before I get into the review, the blurb as always 🙂

Thumped, the sequel to Bumped, manages to be satiric, scary, and romantic at the same time. It continues the story of separated-at-birth twins, Melody and Harmony, girls as engaging as McCafferty’s Jessica Darling. These sisters are the most popular teen girls on the planet. To their fans, they seem to be living ideal lives. Harmony is married to Ram and living in Goodside, the religious community that once meant everything to her. Melody has the genetically flawless Jondoe as her coupling partner, which means money and status—and a bright future.

But both girls are hiding secrets. And they are each pining for the only guys they can’t have…. The biggest risk of all could be to finally tell the truth.

I’ll start off by saying that McCafferty seems to purposely mislead the reader. For example, she starts the story with Harmony toying with a sharp blade. In my mind, she’s leading me to believe that Harmony is suicidal. Pages later, you find she’s just thinking about cutting her hair. She did that in the last book also… planting falseness and failing to deliver.

Personally, I don’t like the style as it ends in a letdown. The book, particularly the beginning, was full of instances such as that. To me, the style reminds me of a kid who’s just learned how to put to use “just kidding.” Kids tend to overdo it in the beginning. That’s what McCafferty does with her writing.

McCafferty also breaks the 4th wall at some point, having Harmony at one point talk to the audience. It was weird. Plus, when she did it, she made it seem like we were in on her secret, but she hadn’t told us anything yet, because as I mentioned, McCafferty likes to be secretive about things that aren’t significant.

In fact, McCafferty is so awful about sharing details, I got through 75% of this book before she revealed the reason Ram was shunned in the last book.

I will say that McCafferty saved some unexpected twists for the ends. When I say unexpected, I mean completely unexpected. Whereas she hinted at other things and left me hanging, I had no idea she had a few whammies stored for me. I liked it. I wish she’d do that more often.

I struggled a bit with the character development, particularly with the Jondoe-Harmony saga. Sometimes I wonder if I’m too far removed from my childhood to understand the motivations of these young folks. For example, falling in love overnight stumps me. Then you have people who talk about love at first sight, so who knows. Maybe I’m just too much of a left-brainer to give myself over to those kinds of instant emotions.

I have to say, the kiddos really dragged the adults through the mud with all their trickery. Parts were believable and parts were not. Really, I feel like anything I’d provide in the way of specifics would be spoilers.

Everything was wrapped up neatly in the end… a bit too neatly in some cases. Still, it’s certainly better than a cliffhanger. Overall, I’d give this book a 3 out of 5. The storyline really was a continuation of the last book. We got a happy ending, somewhat. The characters were okay. Really, the premises was great but the delivery didn’t wow me.

This book had my interest years ago when it first came out in 2011. However, I had a list a thousand books deep. When I got back into reading again, I decided to look for some of the older books on my list that I’d yet to get to. Lucky for me, I happened to find the Kindle edition of this book at my local library. As usual, the blurb before the review: 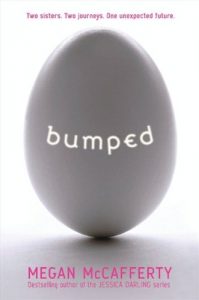 When a virus makes everyone over the age of eighteen infertile, would-be parents pay teen girls to conceive and give birth to their children, making teens the most prized members of society. Girls sport fake baby bumps and the school cafeteria stocks folic-acid-infused food.

Sixteen-year-old identical twins Melody and Harmony were separated at birth and have never met until the day Harmony shows up on Melody’s doorstep. Up to now, the twins have followed completely opposite paths. Melody has scored an enviable conception contract with a couple called the Jaydens. While they are searching for the perfect partner for Melody to bump with, she is fighting her attraction to her best friend, Zen, who is way too short for the job.

Harmony has spent her whole life in Goodside, a religious community, preparing to be a wife and mother. She believes her calling is to convince Melody that pregging for profit is a sin. But Harmony has secrets of her own that she is running from.

When Melody is finally matched with the world-famous, genetically flawless Jondoe, both girls’ lives are changed forever. A case of mistaken identity takes them on a journey neither could have ever imagined, one that makes Melody and Harmony realize they have so much more than just DNA in common.

I just come out and say it. Overall, it was an interesting read. I started it not too long after finishing Christine Feehan’s novel. Since I wrote the review 3 days ago, I have to say I cruised through this book fairly quickly. I didn’t stop my life to finish it, as I did with my Kresley Cole reads, but I didn’t let this book linger either.

I found the premise compelling. It reminded me a lot of the Handmaiden’s Tale that’s on Hulu. Society is plagued by infertility with only a few individuals able to keep humankind going. In this case, it’s teenagers. Everything that is held as taboo when it comes to teen sex and pregnancy today is glorified in McCafferty’s book. I imagine quite a few individuals may take offense to this. In a dystopian world, I can see how values change. What would we do as a society if we knew that no other babies would be introduced into our lives if not for teens? Throughout history, select individuals have been exploited and here it’s no different. This book takes an opportunity to challenges what is right and wrong.

One critique I find common is in regards to starting a book in the place. It’s often encouraged to start it right in the middle of the action. I think McCafferty did that. However, she wasn’t as successful in doing it as she could have been. Her book started sometime after the twins met. In doing so, there was a lot of backtracking to catch us up with the story. There was also backtracking when it came to other parts of the story. For me, it was an organizational nightmare. I’ll give you an example, and this is a bit of a spoiler.

The first words in the book are “I’M SIXTEEN. PREGNANT. AND THE MOST IMPORTANT PERSON on the planet.” It takes 5 chapters to find out that she’s not pregnant. Instead, she’s just trying out padding that makes her look pregnant. To me, it’s a cheap trick to create a fake and extremely forced surprise. There were also vague references to significant events that happened in the past. I know one reference was reviewed early in the book and mentioned a few times. I didn’t get the details of whatever it was until the book was probably 75% or more finished. To be honest, the reveal wasn’t that spectacular. The author could have just come out with the details when it was first mentioned. Another reference was mentioned maybe about mid-point and near the end, but I never got the details. I imagine it’ll be revealed in the next book. I don’t expect it to be worth the wait.

One aspect of the book I found weird and a bit annoying was the lingo. I know the author tried to be fresh with the talk, but it came off as forced. I’d even say unoriginal and maybe even cliche, which seems a bit of an oxymoron when trying to develop a new way of saying something. For example, she has MiTunes in lieu of iTunes. In fact, everything technology base began with a Mi instead of an i, which isn’t exactly original at all, just a cheap ripoff.

For the most part, I’ll say the storyline was good, but the presentation could have used a bit of work.

Character-wise. Both Melody and Harmony were seriously flawed, but isn’t that what makes great characters? Each had their own sense of righteousness and naivety. Melody was wrapped up in this grand idea of becoming a pro breeder. Her whole life revolved around boosting her credentials. Yet deep down, she seemed a bit appalled by the idea. Harmony was a bible thumper set on saving the world… but mostly her sister. Even as she’s condemning and spouting righteousness, she rebels against the life chosen for her. I can’t say either character was endearing. However, they were fascinating. I’m curious to follow their stories further. Not just the twins, but also Jondoe, Zen, and Ram (who had more of a cameo appearance than anything).

I give this book a 3.5/5. My library has a digital copy of Thumped. So I’m off to read the Kindle version now. 🙂

I remember when I stopped reading the Carpathian series. It seemed as if all the storylines were the same. New characters, same personalities… particularly for the males. Since it’d been so long since I’d read this series, I figured that … END_OF_DOCUMENT_TOKEN_TO_BE_REPLACED

I remembered that I stopped reading Dark-Hunter novels because the superpowers Asheron had took away the challenge. I picked up this book anyway. I figured I’d been out of the reading scene for so long that I’d be able to … END_OF_DOCUMENT_TOKEN_TO_BE_REPLACED