Just reading the blurb on this one makes me want to see it on the big screen. It gives me chills all over. 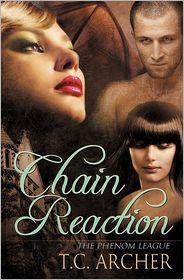 Former Chicago Detective Jordan Pierce put his life on hold in order to protect America’s secret weapon against the Nazis, The Manhattan Project. But he can’t protect himself as his humanity is eaten away by a mysterious disease that destroys him, while at the same time makes him more powerful than any man he’s ever known. Jordan finds out how much the disease has devoured his soul when he falls in love with the woman who might destroy America and tear apart his last shred of humanity.

A moment later, I halted in front of the closed door where Dr Nichols waited. The name painted on the glass read: Dr Enrico Roma, the alias of the great scientist and Nobel Prize laureate Enrico Fermi. The alias didn’t fool anybody but the ignorant. Light shone through the milky glass window. I blew out a breath. The last thing I wanted to do was interrogate a hysterical woman.

I opened the door and stopped dead at the sight of a shapely blonde leaning against Fermi’s mahogany desk. I stared as realization sunk in that the Veronica Lake look-alike standing there was the same egghead pictured in her personnel file. The glasses she’d worn were absent and, despite the red-rimmed eyes and drawn expression, the single overhead light warmed the creamy complexion that had looked bland and colorless in the photo.

Thick blond hair slid across her face in a broad wave and flowed down slim shoulders. Suddenly, I understood the reasoning behind the functional bun in the picture. Despite the legs that mesmerized a man all the way down to the high heel straps, the tweed skirt and blazer she wore emphatically stated the bombshell figure was off limits. But the moment a man laid eyes on her luxurious hair all bets were off. My breath caught with bloodlust as I drew in her scent from across the room.

Gray-blue eyes stared from behind the drape of blond hair. Her gaze flicked to my waistband and I realized she’d glimpsed the colt holstered beneath my suit jacket.

“You wear your gun like a gangster,” she said.

I startled. Her voice, low and sultry, held a shaky note, but I knew the remark was payment for my staring.

“This incident requires I carry a weapon.” My drill sergeant used to berate any reference to the word gun. “Your gun is between your legs, son. Your pistol or rifle is called a weapon.”

She continued to stare and guilt stabbed at me. She’d discovered a colleague who’d been brutally murdered, and I stood in the doorway gawking at her. I swallowed, feeling like a school kid.

“Dr Nichols, I’m Agent Pierce, head of nightshift security.” Her fingers tightened around a lace handkerchief gripped in her right palm. I didn’t want to step closer, but had to. Her pheromones were making my blood, or what was left of it, crave an infusion from her veins. “What happened?”

Her gaze dropped to the hankie and she began working the fabric with both hands. “I was working late and needed Leon to come to the lab. I couldn’t get the Geiger counter to calibrate. I knocked. When no one answered, I opened the door and…” Her eyes swung up to meet mine. “So much blood.” Her gaze remained locked with my eyes as if demanding a response.

“I’m sorry,” I offered. “I thought you were assigned to dayshift.”

She swiped at the corners of her eyes with the handkerchief. “I switched shifts yesterday so Leon and I could calibrate the new equipment.”
I nodded. The scientists worked a twelve hours on, twelve off schedule seven days a week. We were in a race against Nazi scientists while men died in Europe, North Africa, and the Pacific. “Did you notice anything unusual tonight?” I asked.

“Hear anything strange on the way to Dr Heinrick’s office, pass anyone in the hall?”

She shook her head. “Maybe he’s still here.” Something in the way she stared at—through—me, searching for answers and fearing what she might find, threatened to tip me off balance. “The murderer is gone,” I replied in a level voice.

“Why kill Heinrick?” she said. “Why not Compton or Fermi? But Heinrick…” Her voice trailed off.

“Are you saying Heinrick didn’t know anything worth killing for?”

“I suppose we all know something worth killing for. Each scientist on this project is top in his or her field. But the project will go on without Heinrick. If we lost Oppenheimer, or Fermi, the project would be delayed, if not brought to a standstill.”

“Did you enter Heinrick’s office?” “No, I took one look and ran.”

The response, given without hesitation, or guile, made me wonder if this woman ran from anything.

“This was the first office I came to,” she said.

Her story made sense, and my instincts said she was telling the truth. I had learned to trust my sixth sense, especially the last eight months. This ability was another one of those things I couldn’t explain, like being conscious of the way her pheromones where working on me double-time.
“Are you staying in the dorm?” I asked. She nodded.

“I’ll have someone escort you there.”

Desire to go with her shot to the surface with the heat of a volcano. I pictured white skin, full breasts, and blond hair between perfect thighs. I forced my breathing to remain even, and the swelling in my shorts abated. I’d never experienced such sudden, intense lust. If I escorted her back to her room I would drink her blood—and God only knew what I would do to her afterward. My pulse jumped with the thought of her warm blood flowing past my tongue down my throat… and her tight walls closing around me as I entered her.

Clipped footsteps sounded almost noiselessly on the linoleum floor of the hallway and I recognized McHenry’s walk two seconds before Dr Nichols’s eyes shifted over my shoulder.

I glanced back to see him standing in the open doorway. “The general wants to talk to you.”

A measure of sanity reasserted itself. I had to get away from her, now. “Could you escort Dr Nichols back to the lab?”

His expression lightened. “No problem.” He stepped aside and motioned toward the door with an open hand. “Dr Nichols.”

She cast me a farewell glance and headed toward the door. I tried tearing my eyes from the gentle sway of hips as she walked past, but couldn’t, and felt the heat swell to the surface again. I had to find one of the small rodents whose blood I drank to keep my thirst for human blood at bay, or go back to Heinrick and hope the congealed blood in his decaying body would make me forget the craving. Rising desire twisted my insides and I feared even Heinrick’s dead blood wouldn’t work against the warm, pulsing blood of Dr Nichols.

To enter fill out the RaffleCopter. 🙂
a Rafflecopter giveaway