This is definitely one of the coolest books that I’ve read. If you’ve ever played a first-person shooter, you could probably relate to this game. Before I get into the details, how about we start with the blurb. 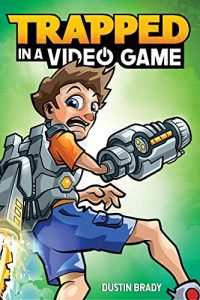 Kids who love video games will love this first installment of the new 5-book series about 12-year old Jesse Rigsby and his wild adventures inside different video games.

Jesse Rigsby hates video games – and for good reason. You see, a video game character is trying to kill him. After getting sucked in the new game Full Blast with his friend Eric, Jesse starts to see the appeal of vaporizing man-size praying mantis while cruising around by jet pack. But pretty soon, a mysterious figure begins following Eric and Jesse, and they discover they can’t leave the game. If they don’t figure out what’s going on fast, they’ll be trapped for good!

Fun, relevant, and action-packed Trapped in a Video Game is the perfect book to get kids off screens and into books! Included in this edition is a bonus More to Explore section that teaches computer programming concepts through a fun game.

The book gets into the video game right away, starting with the Tutorial. Like all tutorials, it’s a bit slow. After the tutorial the action really starts and Jesse gets thrown into a real video game.

The contrast between the main character and his sidekick, Eric, were awesome. You had main character, Jesse, who was a real stick in the mud. He was all work and no play, for the most part. Jesse had to be dragged into doing anything new or exciting. Then you have the sidekick Eric. He was ready for an adventure. I really liked Eric. Life is meant to be experienced, and he definitely wasn’t afraid to hop into the fun and games.

About halfway through the book, it started to remind me of Jumanji. I haven’t seen the old Jumanji, but I’d say this is similar to what Jumanij would be if it were a video game instead of a board game, like the first movie. Only this time, the game is set in cities around the United States instead of in some jungle. It had a nice feel to it and gave kids a little bit of American geography. Not a lot… just enough to identify some main landmarks around the US.

The only thing I didn’t like about this book is it had no real conclusion. I read that this book is meant to be a 5-book series, which might explain why. As for this book, it closed out the main character’s dilemma, sure. The main character also experienced growth. However, the book definitely had an unfinished feel to it. Not exactly a cliffhanger, but rather a “to be continued.”

Overall, I truly enjoyed this book. It was full of laughs. I give it a 5/5. I’m off to read book two, which I hope will wrap up everything a bit more nicer.

This is my opinion. I like the book because it has adventure, action, and it’s funny. The characters are very interesting and strange. I think it was cool and interesting. The setting was so nice, and it wasn’t like others books. I don’t know books like this one, like getting sucked up in to a game.

The characters were Mark, Jesse, and Erik. Mark was mysterious and strange like how did he survive 20 years with out food. Jesse was a usual kid. He went over to kids houses and usual things. Erik was fun and mean at the same time, like the time he pushed Jesse off a cliff. They were a team, so getting pushed wasn’t so bad.

The setting was in a game. So, it made sense. Like the giant praying mantis and giant crocodile. I also kinda want to be in it to. I rate this book 3 out of 5. I suggest this book if you like action, adventure, and funny things.

*This book was provided to us through Netgalley.