When I read the blurb for The Hand of God by Tim Miller, Dexter came to mind. Then I read Mr. Miller’s guest post (tee hee… I got to read it before the post went live), and my thoughts filled with Pulp Fiction. So before Mr. Miller shares a bit with us, I’m going to share a little kinetic typography video from Pulp Fiction. 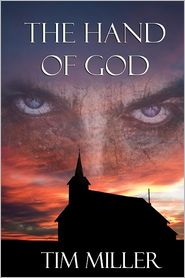 Charlie Sims is not your typical preacher. God has called him to rid the world of sinners. One corpse at a time, he carries out his brutally selfless work until a more powerful preacher appears who will change his life forever. A battle ensues for the fate of mankind.

Charlie’s devout beliefs are shaken as he finds himself hurtled into a battle for the end of the world where nothing is what it seems. A violent tale filled with death and chaos, the lines between good and evil are blurred and eventually demolished.

Thank you to Reena for having me as a guest today.  Your hospitality is very much appreciated.  Today I’m here to discuss my recent book, The Hand of God.  Many folks confuse this for a “Christian” novel, but it is far from it. There are many religious and Christian themes however.  So I’d like to talk about some of those things. For those who haven’t read it, The Hand of God starts out with Pastor Charlie, a mild mannered preacher, who also happens to be a serial killer. He’s a serial killer because he thinks he was sent by God to do his work by cleaning up sinners. Throughout the book there are many twists and turns. The story is written from Charlie’s point of view, so we can get a good look inside his head.

As the story unfolds, Charlie learns many things about his own beliefs and religion itself. Having studied religion and Christian ministry myself, I find the subject fascinating. What Charlie learns in the book is what many of us learn every day. How many of us have ever been determined to get a new job, or attend a new school? What happens when we reach that goal? Quite often, things turn out much differently than we expected. Maybe its harder work than we thought, or maybe the institution itself isn’t what it was cracked up to be.

I know when I joined the Marine Corps how excited I was. I had read all about it was all about brotherhood, teamwork and hard work. Once I’d been in for a year or so I saw how it really was. Things were more about politics, who you know and physical appearances. This was disappointing to me, but a hard lesson.

So now we have Pastor Charlie and his religion. There is no one thing I can think of where people believe they are more sure of anything, than in any religion. I worked in ministry for a while so I saw this first hand. Every person, even among Christians had varying levels of beliefs, and every single one of them thought they were absolutely 100% right and there was no room for debate. I knew one preacher who was so determined, that to disagree with him was not just a friendly disagreement, but it was to spit in the face of God himself.

So my question is, the Marine Corps didn’t live up to my expectations, I know many for whom marriage did not meet their expectations. I’ve even heard pro football players talk about how the NFL was nothing like what they had expected. Knowing these things, is it not possible that whatever religious beliefs we might hold, that things might not always be what you thought? I mean, you read the Left Behind books, and they lay out their interpretation of Bible prophecy step by step. If you talk to the authors, they are 100% sure this is how things will unfold. How are they so sure and what if they are wrong? What if we’re all wrong? I know we can’t all be right. I know if there is a God, he doesn’t always do what we expect. Case in point: So as we can see, we may get our prayers answered, or what we wanted, but not in the way we expected. As the plot twists unfold in the Hand of God, Charlie discovers this on several levels. Although in realizing his beliefs and religion isn’t what he thought it was, he finds a new strength within himself. A strength he never knew he possessed and that may have no limits. This can be true of each of us. Even though we may have no religious beliefs, or maybe they don’t live up to our expectations. That doesn’t make us any less powerful. Just like Charlie, we can all learn to tap into that part of ourselves, to release our strength. Tim Miller has studied various religions, as well as psychology and has worked in several fields involving the study of human behavior. After serving four years in the U.S. Marines, Tim spent six years working as a corrections officer. Tim also worked as a technician in a psychiatric center. The Hand of God is Tim’s first novel in almost ten years. He currently lives in San Antonio, Texas with his fiance and their children.

Tim became a fan of horror as a teenager. At the age of fourteen he would often read Stephen King books while listening to Iron Maiden on his head phones. He would write short stories to entertain himself and his friends. In 2001, Tim Published his first book, Without a Trace, and then Out of Nowhere a year later. These were mystery/suspense thrillers, but frightening enough in their own right.

After a ten year break and writing two inspirational books, Tim is back at it writing horror with The Hand of God. It is the first book in the series about Pastor Charlie, the preacher/serial killer. Tim is currently working on the second book in the Pastor Charlie series.