It was a fluke I found Kitty Thomas. I stopped by Leontine’s Book Realm one day and happened upon her post, boasting about Comfort Food. At the time, Ms. Thomas offered it as a free read. And to be perfectly honest, I never expected to finish it. I was just curious to see what got Leontine all excited. Well, I tell you, I did finish it. And I loved it! You can read my review here if you wanna know why.

Well, Ms. Thomas was generous enough to grant my request for an interview. If you’ve read Comfort Food, please don’t hate me for interrupting Ms. Thomas from her writing. I can imagine you’re as anxious for her next work as I am. For now, just enjoy the interview. 🙂

Tell us a little about your debut novel. 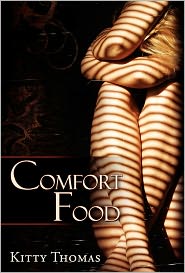 The basic premise of Comfort Food is: A man kidnaps a woman and turns her into his willing toy. He uses several conditioning methods to achieve his goals but he is never brutal or violent with her. In the end chicken soup ends up being punishment and whips are perceived as pleasure. I know a lot of people think both of those concepts… chicken soup as punishment and whips as pleasure is just too bizarre to contemplate. Though, that’s probably why many take a chance on the book, to find out.

When did you realize you wanted to be an author?

When I was itty bitty. I’ve always wanted to write. I don’t really remember a time when I didn’t want to. From the time I knew people were behind creating books, I wanted to do that.

Who was/is your biggest inspiration for fulfilling your dreams of becoming a writer?

I don’t think I really had an inspiration like that. I’m pretty self-possessed. I can’t point to anyone who inspired me to go out and do it. I have been inspired by people along the way, but nothing so dramatic that it was a “defining moment.” Though I will say that probably “Story of O” was one of the books that inspired me to try writing erotica.

You went the indie route verses traditional, why is that?

I don’t think a publisher would have touched Comfort Food. It’s too dangerous a book for them. It’s noncon erotica and it’s unapologetic about what it is. It isn’t a politically correct ending. Or a politically correct message. And publishers, I think, are very uncomfortable with that. I didn’t even send it to any publishers or agents. I knew from the beginning that this work was mine to create and produce how I wanted it. I think a publisher would have asked me to make changes that would have ripped the soul out. This is the most personal thing I’ve ever written and probably the most personal thing I ever will write. The content just wasn’t up for debate.

How did you come up with the idea of Comfort Food?

It started out as a fantasy, but then it ended up a lot darker. It was supposed to be lighter rape-fantasy fare. Although this works on the rape-fantasy level for some, it also works on an emotional/psychological level as well as a metaphorical level (surrender/submission). I was also going through a dark personal period when I originally wrote it, so it definitely influenced what we ended up with. It was pretty painful to write.

When you wrote Comfort Food, was there a message you meant to leave with the reader? and if so, what was it?

I think there were a lot of messages. I guess in a way it’s a submissive’s anthem. This is most clear in the epilogue, especially the last line of the book, which I won’t spoil for anyone who hasn’t read it. CF also deals with power vs. rights. I think a lot of people confuse “legal rights” with power and who has it in any given moment. You can’t appeal to your rights in every situation in life. Comfort Food explores the use and relinquishing of power. It also explores various types of enslavement, like the type of social enslavement we all consent to when we allow the opinions of others to dictate our lives for us. Despite everything that happens, Emily’s largest internal struggle has nothing to do with the man who took her, but with how society will judge her for making the choices she makes. And that’s where most of her psychological pain comes from. I think readers can identify with that because that’s where “most” people’s psychological pain comes from. When we can truly let go of the opinions of others, we can be free.

Comfort foods has generated quite a reaction amongst readers (both positive and negative). Why do you think that is?

I think because it’s really emotionally raw and honest. The book explores some uncomfortable truths that some might not want to deal with. I’m flattered that it has gotten such strong reactions (both positive and negative). The book definitely stirs up a lot of passion in people and I really didn’t expect that. I thought many would find it “disgusting and wrong and immoral” as a knee-jerk sort of reaction because that’s just how people are, but I didn’t expect the outpouring of fan mail I’ve gotten from people telling me the book changed their life, or it was one of the best books they ever read. I just never expected it to grab hold of people like that.

Many fans eagerly await your next novel. What can we we expect in the near future?

The next book, Guilty Pleasures (which is not a sequel), should be out by Christmas. I really love how this book has turned out and am in the editing stages right now. I’m not sure how fans of Comfort Food will react to it. I think I might lose some readers who feel GP is too much for them, lol. Writing the disclaimer for this one will be fun. It’s more slave/rape fantasy but coming at it from a different angle. It’s definitely another mindfuck, but in a different way from Comfort Food. The main character of this one, Vivian, kind of keeps walking into her situation. It’s not like Emily where she’s just kidnapped and has to deal with it. This is someone who is kind of actively looking to be enslaved by something even if she won’t admit it until it’s too late to get free. Comfort Food has sex, but not a lot for erotica. Most of it is psychological. While Guilty Pleasures has psychological aspects, there is a lot more sex: coercion, blackmail, nonconsent (and yes, we will be eroticizing it, that’s what we do in erotica 😛 ), multiple partners, some girl-on-girl action, and a little boot worship, cause shiny boots are awesome.

Any final words you’d like to leave with the readers?

Didn’t I say enough words already? 😛 I think I covered it all. I do have a newsletter I’m starting up for people who would like to receive updates on new releases and such. People can subscribe by going to: http://www.kittythomas.com and filling out the contact form. Just list subscribe in the subject line and I’ll take it from there. Comfort Food is available at Amazon.com, Amazon.uk, Barnesandnoble.com Smashwords.com (and I think Sony, Kobo, and the Apple ibookstore, but don’t quote me. It’s in several places.)

In addition to ebook, Comfort Food will be out in hardcover by the end of this month.

Ms. Thomas has graciously offered a digital copy of her novel Comfort Food. And YES, we are going to take her up on that offer!

THIS GIVEAWAY IS CLOSED, BUT FEEL FREE TO COMMENT

That’s all. Ms. Thomas, thank you again for the interview and sharing your book with us.