If some of you haven’t caught on by now, you should know I’m kind of a Zoe Winters stalker. Shh…don’t tell her that. She might start avoiding me. The thing is, Ms. Winters created this character called Zoe Who? which put thoughts of self-publishing into my head. Now being the newbie and all, I wanted to know more. Today, Ms. Winters has offered to answer a few questions which have tugged on my mind.

Tell us a little bit about your books. 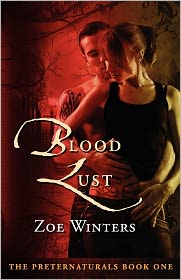 The Preternaturals series is set in a world in which humans for the most part don’t yet know what goes bump in the night. There are several different species/groups I deal with: incubi and succubi, vampires, shapeshifters (called therians in my world), Guardians (a demon breed that works guarding mostly vampires during their daylight hours), magic users (wizards, sorcerers, witches), and I may introduce other demon breeds later. Each group has their own political structure and secrets.

Each book technically “stands alone” but some readers might not get all the subplots and back story if they don’t read in order. Different books will focus on different species and different places.  Blood Lust, the first book, is a series of three novellas that happens in a place called Cary Town, where the therians live under a police state. The first novella involves a werecat and a sorcerer, the second involves a vampire and a human, the third involves a werewolf and a human, though that human isn’t what she appears.

Who the heck is Zoe Who?

That is the $64,000 question, huh? Who is Zoe and why should I care? 😛  Zoe Who? is a cartoon video series I started on Youtube. The episodes can be found here: http://www.youtube.com/user/ZoeWinters1 Basically the series makes fun of the publishing industry, my genre, me, etc. There is a lot of material there, LOL. It’s a way to vent a lot of the frustrations in this business and dealing with people, in a snarky, funny way while also garnering a little bit of marketing exposure and sharing my self-publishing journey. Everything is funnier with robotic voices and cartoons.

What made you decide you wanted to get into the self-publishing industry?

I really don’t like working for other people or other people telling me what to do. I’ve had 33 jobs (before I gave up entirely on the concept of working for others) and it just never worked out. I’m an entrepreneur. Someone else’s cubicle is not my natural habitat, and it was becoming a pain in the butt trying to fit a square peg into a round hole. This feeling extended to creative pursuits. The whole idea of the traditional publishing process depressed me. As I got closer to the point where I felt something was ready to be submitted, the writing flow just shut down. Not to sound like a prima donna but I “couldn’t work under those conditions”. LOL. I wanted to succeed or fail on my own. The idea that I needed “permission” to even play the game when we aren’t talking about brain surgery here… it’s just not that serious. So I decided to start my own business and do my own thing.

What was your experience with the traditional route before self-publishing?

OMG. So limited. I’d done a lot of research and heard a lot of horror stories and that’s about the extent of it. When I realized that most NY pubbed authors weren’t making a living from their fiction and still had to have full-time jobs to make ends meet I was like “screw that.” That was the only remaining motivator left to do it that way. I submitted one book to an agent (which wasn’t ready. I’m in edits for that book right now. It’s come a long way since then.) And when I wrote Kept I submitted it to one publisher. By the time I submitted Kept to the publisher, though, I was already really leaning toward self-publishing. I was in the bizarre position where I actually “wanted” them to reject me, so I didn’t have to stand at a fork in the road and make a choice. I wanted to find out what I could do by myself. They did reject me, but it was a very nice rejection letter that offered several bits of advice (most of which I acted upon), to improve Kept. Then I self-pubbed it.

When did you know you’d learned enough and were ready for self-publishing?

I don’t think you ever really learn enough. I think you have to build your wings on the way down. I do think you should find people who you consider to be much better writers than you to critique and beta your work. And find hard asses who won’t let you get away with lazy writing. When you get to the point when it’s time to publish, you’ll know. Then get a good editor to make sure you put out something professional. There is a lot of information out there now on all aspects of self-publishing. You learn from doing. You learn from your peers. And you just keep growing and moving forward.

Editing and critiquing: What says you about them?

hehe. I think I answered that in the last question. Basically… editing and critiquing are absolutely necessary. I’m sure there are a very few people out there who can edit their own work because they have some amazing ability to step back from it and see the problems and fix them, etc. But… that’s probably not me or you. Even if it is, it can’t hurt to have other eyeballs on your work. Though one caveat is… you have to know when to listen to your gut. Some suggestions will kill your work. You need people you trust and more than one. If several people all see the same problem, then even if you don’t like their suggestions for fixing it, you probably need to do “something” to it to get across what you’d intended.

Marketing for the indie industry relies a lot on word of mouth. How do you get your name out there?

Right now I just do Twitter, Facebook, My Blog, my Zoe Who? series, guest blogging, blogging at IndieReader.com. I recently did a Kindle giveaway and blog tour that got my name out a lot. I’ll probably do a big promo with each book release like that. Not sure if the prize will be a Kindle or not… I feel like that’s not specific enough to my demographic and throws off the Amazon recommendations a bit. I also have a little bit of paid advertising coming up with Kindle Nation.  I used to go to forums and comment on a lot of other people’s blogs. But I’m downgrading from a lot of the drama. I don’t have as much time for it now and my platform is starting to get to the point where I don’t “have” to do all that extraneous stuff. But the other stuff, I still do, and will do for the foreseeable future.

The finished product: How do you know your beloved is ready for readers?

When I can look at the cover and know it stands up next to any other professionally produced book cover (helps that I have a pro cover artist). And when I can read it without cringing. You may have heard this from someone else before… but when you do a read-through and you keep switching back and forth on little things, like a word choice, or punctuation in one sentence, then you know you’re pretty much done.

Any advice or words of encouragement for writers?

You aren’t curing cancer or feeding Ethiopian children. You are just writing words, putting them together in an attractive package, and trying to find an audience. It should be something you love, not something that’s stressing you out. Try not to compete with everybody, because there will always be someone who is a better or more successful writer than you, and someone who isn’t as far along as you. Be as generous as you can, but don’t let people take advantage of you. Have fun. Learn, grow. Pick yourself up and dust yourself off when you fall down. The only thing that matters is how you finish, not how you start. And with that last bit of warm fuzzy platitude, I’m out.  Thanks for having me!

Zoe Winters writes snarky paranormal romance and is a loud-mouthed advocate of the indie author movement. Her favorite colors are rainbow and clear. Her books are available at Amazon and Smashwords.com.  You can find her at the following places:

I don’t know about others, but Ms. Winters has been a world of inspiration for me as a wannabe published author. Thank you.

One thought on “Interview: Zoe Winters on Publishing”