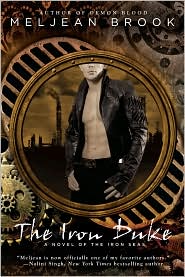 This will probably be the first week since I started reviewing books that I actually won’t have one. Honestly, I just haven’t been pu to reading lately. I just recently found my motivation to write after letting the bombardment of emails sink me. 🙂 Not that you folks are worried, but I’m back on track again with my writing and making excellent progress. Since I’ve failed to give you a review today, I thought it’d be nice to share what I’m reading anyway. The Iron Duke by Meljean Brook.

Who exactly are the Horde? I understand what they did, but I don’t understand why. Also, what is so different about them physically? When I think of horde, I think World of Warcraft and Everquest. Are they trolls, ogres, and goblins?

And what’s the Duke’s problem? He comes on a little strong, and I can’t understand why he’s so insistent. It might just be Brook’s style since I had a hard time understanding Machen’s motivation in “Here There Be Monsters” (review here) also.

0 thoughts on “No Review: The Iron Duke by Meljean Brook”