It’s the last day of Spring Break for me, which means my time for reading is whittling down. One thing for sure, I’m glad I managed to squeeze A Mate to Cherish into the mix. Before I get into my review, how about a blurb? 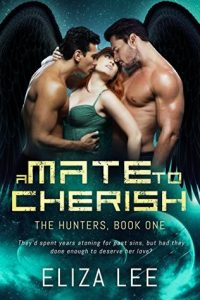 They are fallen from grace. A race once worshipped that had grown arrogant and greedy. Now they are few and spend their lives hunting the guilty and bringing them to justice.
A sexy dream. Two hot, sensual lovers. More pleasure than she’s ever felt before. What more could a girl want?

Um, maybe for it to be real. Lauren has hit rock bottom. After fleeing Earth, she ends up penniless and homeless. Before she can even begin her new job, she’s arrested for prostitution and thrown in jail.
Could things get any worse?

Well, yes, actually. They could.

Try getting horribly ill, ending up on the auction block, and being sold to two gorgeous, domineering, stubborn men who intend to return her to the very place she fled.

Malik knows the female in their dreams is their mate. He wants her, craves her, but he can’t bond with her without Tarin, and convincing Tarin she’s theirs will be an almost impossible task.

Tarin is always in control. Always in command. But when the hunt leads them to Lauren, he finds that very control tested. She intrigues and annoys him. Brings him both joy and terror.

But most importantly, she makes him feel.

The Stars of the Show

I think today, I’m going to start with the characters. First, Laylah Roberts identified pretty much every one of the good guys from the onset of the book. It was interesting to have all the characters briefly introduced at once. I didn’t remember most of them, since only a few had any significant part in the book. However, I liked the idea of having finite characters. It gives me the impression we’ll receive at least 4 more books, where the other packmates find their bonded ones.

Lauren was a our heroine. She had a bit of a false bravado, yet she was also courageous. Truly, I think she only survived because she was the main character. If not for being the heroine and with the folks she got into trouble with, her mouth would have surely gotten her killed if she were a side character.

Malik, our second. If you’re familiar with the characters on the Orville, he kind of reminds me of Bortus’ mate Klyden. He’s more of a peacemaker/caretaker, but not at all feminine. He’s 100% male, through and through. I rather liked him. There was something about his tentativeness that I found rather charming.

Finally, there’s Tarin, the first. He’s supposed to be the protector. However, I don’t see him more protective than Malik. I’d say he’s more of a leader than anything… and a provider. At times, his boldness surprised me. I found him very demanding. I tend to dig in my feet when I feel like someone’s controlling me, so I’m not quite sure how I feel about him. He definitely wasn’t a kick to the curb type of guy, and I certainly saw his appeal. Just not sure I’d mesh well with him.

Most romances I read have one heroine and one hero. This one had two heroes, which worked well. I’d say when it comes to multiple sex partners, two guys is more than enough. The author wrote the roles so none of the characters ever seemed excluded. I always hate when there’s not enough people to go around and one of the characters gets forgotten, left out, playing the voyeur or something odd. One gal and two guys sounds just right. Pulled directly from the book, Roberts described their of this species as:

There were always three. A first who guided and protected, a second who calmed and cared for them all, and a female. An elika. The female was always the center, always the most important, the most cherished.

I love that! I could see this in the way the males acted toward their female. And it wasn’t weird. I’ve read a lot of novels where the female is never let out of the male’s sight once they’ve been claimed. This wasn’t at all the case. They had a bond, but it was reasonable… kind of the way one would expect a normal male to act. Plus, they had great chemistry.

This novel started hot and heavy. From page one… no… the first line, the heroine was getting hot and heavy. It gave me a pretty good feeling that tis book was made for me. I have to say, I wasn’t disappointed.

The stakes were high and believable. At first, I couldn’t understand why her bounty was worth so much labor. As the story progressed, it all became clear and added believability to the story. I liked that the main characters had something significant to lose (their life, each other, their livelihood).

The style of writing was different than I’m used to. It had a bit of a cheese factor. In fact, it was so cheesy at times, I had my doubts. Slowly, I got a feel for it. It was kind of cheesy in the way Guardians of the Galaxy is or The Orville… quirky in an enjoyable way.

I would say there was only one time toward the end, when Tarin cooked up a hair-brained scheme that was the stupidest and most suicidal idea ever, that I had an are you kidding me? moment.

Other than that one hiccup when the pack let Tarin think for them, I thought the book was well laid out. I got the impression Laylah Roberts knew exactly where she was planning to take the story because everything wrapped up extremely neatly in the end. I was highly satisfied with the conclusion. I’d definitely read another of her paranormal romance stories. I give this one a 4.5/5.

*I received a free copy of this book through Netgalley.