Yesterday, I finished all my homework for the week (a day ahead of schedule). As a reward, I decided to take on a book. I had my first request to Netgalley in over 5 years approved and got granted Consort of Secrets by Eva Chase. The cover was nice and sparkly, as you can see below. What attracted me was the potential for hot, steamy sex. Oh… and it was also paranormal. You know how I love the combination. Before I get on with the review, let’s get a little blurb action: 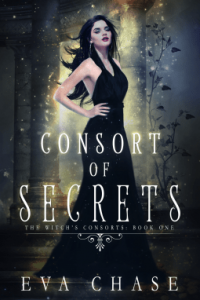 Every witch knows the rules: Stick to your own kind. Never reveal your powers to outsiders. Take a consort from the witching families or kiss your magic good-bye forever.

For years I’ve been quiet, obedient Rose Hallowell. I accepted the man my stepmother chose for me. But I never stopped missing my long-ago friends.

Now we’re back on my childhood estate to arrange my marriage. The boys I grew up with? They’re still in town—and they haven’t forgotten me either. And damn if they haven’t grown up well.

They’ve got no magic, no place in my life. But they’re charming and sweet and infuriatingly hot, and I can’t seem to stay away. The more I try to resist, the more secrets I uncover about my family, my betrothal, and everything I thought was true about the witching world.

I’ve been lied to. I’ve been betrayed. So to claim my magic and my happiness, I’ll break every rule there is—and then some.

Don’t mess with this witch. Every rose has thorns.

As I mentioned, I was looking for a steamy romance… hopefully something that leaned toward erotica. To be honest, I thought I’d picked out the wrong book when I started reading Consort of Secrets. The book had a definite young adult feel to it. You see, Rose Hallowell seemed to be completely controlled by her father and step-mother. In fact, the opening scene had her riding in the car with them, heading into the driveway of her old family home… and not because they picked her up from the airport either. Rather, she seemed to be living with them, family style.

Rose’s “boys,” a she called them also had a young feel to them. They climbed trees, talked about getting into trouble with her parents, snuck around, things I’d expect from high schoolers and younger. I found early in the story that Rose and the “boys” were actually 24/25 years old adults.

Rose, I could attribute her immaturity to culture. After all, I didn’t know what the typical witching life was like. The “boys,” not so much. I got the impression they were in the United States or possibly even Canada. Rose talked a lot about Portland, which I assumed was Oregon. That being the case, at least one of them would have behaved like North American boys, right?

If Eva Chase took out the sex completely and just left some light kissing and a bit of high school sexual tension, I think this would have made a decent young adult book. It really had that feel to it, even the story line ran in the direction of young adult. The characters seemed more investigative in a kid detective mischievous kind of way than the way I’d expect adults to uncover oddities.

Overall, I think the story line was okay. It didn’t really fit into to the adult genre (style-wise), in my opinion. On the other hand, the sex excludes it from the young adult genre. I think if the stakes were steeper and it’d been a young adult book, I would have been more receptive of the book and liked it a lot more. My expectations were hot and steamy adult romance and I feel like I got a young adult story line with some sex thrown into the mix.

Rose was our heroine. I think I missed the part in the description that it’d be a reverse harem. I thought Rose’s personally worked well with the concept of a reverse harem. I honestly didn’t get the impression she was that invested in the boys. Rather she seemed to be the type of gal who simply wanted the attention of men. After all, she’d been MIA over 10 years without any contact with her boys but wanted to step into her old role. She also seemed to view other witching men as tools to accomplish her purpose. It gave her a bit of a shallow feel. However, I think it worked, particularly if she was leaning toward having a harem of men.

At first, I thought Ky was her leading male. This was before I realized it was a reverse harem. He entered the story first and even had his own chapter early on. It wasn’t until later that I caught on that each of the boys would have their unique role in the story. Of all the guys, Ky seemed the most generic. I found him easy going, with a bit of generosity and practicality. He seemed to set a baseline, where all the other boys deviated.

Seth, Ky’s brother, was the stick in the mud… a naysayer, really. He had a ready counter to anything that was suggested. I think his apprehension and inability to take a step forward really made him miss out in some situations. It gave him a bit of a lackluster feel.

Damon was our resident bad boy. I wanted to like him. I have a thing for underdogs, particularly when they have a story behind their rough edges. In the end, he didn’t draw me the way I’d have liked. I also found him sloppy, careless, and inconsiderate when it came to sex.

My favorite was Jin. He was thoughtful, caring, and selfless, not just in his actions but also his thought patterns. It seemed like Eva Chase left his personality for the last when finally giving detailed introductions of the boys. I think this was an awesome strategy. If she’d given us Jin first, I’d have had a hard time accepting any of the other boys into the picture. Jin’s tender devotion was beautiful.

This book wasn’t as witty as some books I’ve read. However, I did pull out a couple of lines I liked.

Overall, I’d say this was a middle of the road read. I think it could have used higher stakes and a more adult themed story to match the reverse harem concept. Even so, it kept me engaged enough to want to learn how the storyline panned out. I give Consort of Secrets a solid 3.

*I received a free copy of this book through Netgalley.