I remember when I stopped reading the Carpathian series. It seemed as if all the storylines were the same. New characters, same personalities… particularly for the males. Since it’d been so long since I’d read this series, I figured that I could give it a fresh look. I think it worked out well. Pretty much everything about the storyline was foggy. Not exactly brand new, but I had enough gaps in my memory that the personalities were fresh enough. Description first, then the review! 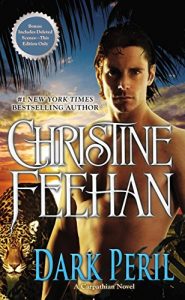 There’s only one way for Dominic—one of the most powerful of the Carpathian Dragonseekers—to learn the secrets of the enemy: ingest their parasitic vampire blood, infiltrate the camp, and relay the information to the Carpathians before he goes out fighting. There is no more honorable way to end his life.

Solange is among the last of the dying species of the jaguar people—fighting to save the remaining shapeshifters from the hands of her own father, a monster who slaughtered everyone she loved. Wounded and weary, she plans one last battle, hoping to stop the man who has aligned with the vampires, and accepting her deathly fate.

Now, two warriors from different worlds will find each other at the end of their time, and discover a new reason to battle to the death—and against all odds, make it out alive.

From the little that I’d retained about the series, I am pretty sure these characters had a fairly fresh perspective on things. Previous Carpathians were pretty controlling if I remember correctly. They had to be tamed by their women. Dominic didn’t even try to control. He was manipulative at best. He seemed to understand what he was getting as a lifemate… a warrior with a mind of her own. In fact, he seemed to sense that if he even tried to crush Solange’s spirit, she’d be out of their faster than lightning strikes.

Solange. Despite being strong-spirited, she was extremely insecure. Feehan stressed many times in the book that Solage was secure as a warrior. Really, I’d say she was confident in her ability to fight and had no fear of death. When it came to simply being a person… not just a woman (in my opinion), Solange was very insecure. She seemed to lack complete confident. I said earlier that Dominic manipulated her. However, it was really that he made requests with the expectations that his insecure lifemate would honor them. I can’t honestly say that’s his fault. After all, she could say no. In fact, I would have liked her to say no to one of his requests. It would have kept it a wee bit more interesting. After a while, it was obvious she’d think about his request a little and then give in.

As for the storyline itself… I enjoyed the action at first. In fact, I thought to myself, whereas the last Kenyon novel I complained about the action, this one kept me pretty well fed. Now, I don’t remember where the last Carpathian novel left off. However, I do think this story progressed forward. I don’t want to give you details, because it’ll ruin things for you. However, we got some closure with the Jaguar people’s line and we’ve unraveled more of the Vampire line. This book was more than simply an introduction to new characters or to provide more in-depth knowledge of the old characters. It was progressive of the overall Carpathian story.

As for my overall thoughts on the book. I’m going to give this one a 3… maybe a 3.5. I don’t really have anything negative to say about the book. However, I had a hard time staying with the story. Something about it just didn’t grab my interest in a way that made me one to devour the book. I think it actually took me about a month of on and off reading… at least that’s the way it felt.