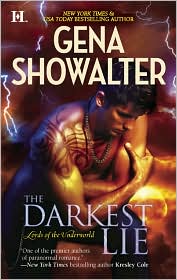 Okay. I have to admit, I was not looking forward to Gideon’s story The Darkest Lie by Gena Showalter. I cannot tell you how bummed I was to see he’d be next, but I was willing to give him a try. The thing is, he was just lame in the past books. His comebacks… oh my gosh… I just couldn’t imagine a book full of lines like “You so do not suck.” haha At the same time, I’d hoped to learn more about Paris. So, I finally purchased the book. 🙂 The blurb from Ms. Showalter‘s website:

Forced to his knees in agony whenever he speaks the truth, Gideon can recognize any lie—until he captures Scarlet, a demon-possessed immortal who claims to be his long-lost wife.  He doesn’t remember the beautiful female, much less wedding — or bedding — her.  But he wants to . . . almost as much as he wants her.

But Scarlet is keeper of Nightmares, too dangerous to roam free, and a future with her means risking everything.  Especially as Gideon’s enemies draw closer . . . and the truth threatens to destroy all he’s come to love . . .

Unlike the last novel, The Darkest Passion (see review here), where the first six chapters dragged and gave me a feeling of deja vu, The Darkest Lie started quite well. Gideon was the first Lord I’ve seen who actually got along (somewhat) with his demon. It added an air of originality. And the voice for Gideon was also quite different from the other Lords. It was almost as if the YA novels Ms. Showalter’s been writing filtered into this one. Because he so like totally used the lingo, if you know what I mean? 🙂 Okay. I’ve dated myself to the 80s and haven’t a clue how kids talk today. Let’s move on. Later in the novel, I didn’t notice the kid talk so much. So maybe Ms. Showalter needed to make the transition into the adult world.

So opposite day with Gideon Lord. How did it go? Well, as I suspected, it got on my last nerve. And really, I didn’t think it had to be so bad. I swear 100 words could have been shaved off the book if Ms. Showalter had let me think for myself. But no, she insisted on interpreting EVERYTHING Gideon said. “I hate you.” Which in Gideon talk really meant I love you. “You, devil.” Devil as in Angel. Yes, the entire book was like that, I kid you not (I wish I could add a smiley face with the mouth drawn across in a straight line, but I don’t know how.)

And I hate to say it, but when Gideon told the truth it got on my nerves even more, cause it was pointless. Remember how he lost his hands in the first place? Come on… let’s not be stupid.

Scarlet was okay. Actually, she started out great. She’s the first female Lord who’s had a major role. Tough? Yep. Spunky? Double check. An unlike the other Lords, she really knew how to use her demon to be most effective. I love that she didn’t shy away from going all kickass. Unfortunately, she lost some of her backbone as the story possessed. I swear she turned into a totally different person. Not until the end did she become the Scarlet I grew to know and love from the beginning. Odd, I always thought the characters were suppose to experience growth, not decline then end up where they started. Go figure.

So I liked the beginning. Then we hit chapter 6. I don’t know what the deal is with chapter 6 and the switch to a secondary character POV, but it happened in the Darkest Passion also. Only this time, there were more switches to secondary characters than before. All I could think about was, “Please don’t do to the Lords of the Underworld what J.R. Ward did to the Black Dagger Brotherhood.” Oh my word did I hate the billion and seven story arcs in Lover Mine (see review here).

The other thing about the POV switches for the Darkest Lie was they were awkward. It’d go from a sensual scene to a blood and gore scene, then back to sensual again. My mind was like, WTF? After visualizing folks getting beaten to death with their own arms, I’m so not down with a tender caress. Not only that, but a lot of the secondary character scenes trumped the Gideon/Scarlet scenes. I found myself caring more about Strider and Amun than any of the horizontal tangos the hero/heroine had planned. Which is a shame, cause the couple really deserved their own book rather than share the glory with folks soon to have their own titles.

I guess my bottom line is that the book didn’t have to be 444 pages long. Cut the translations and the side character arcs, and I think the book would have been okay. Not the greatest, but certainly a lot better than it was.