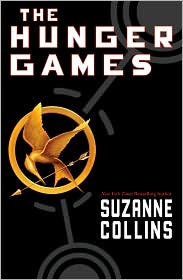 Katniss is a 16-year-old girl living with her mother and younger sister in the poorest district of Panem, the remains of what used be the United States. Long ago the districts waged war on the Capitol and were defeated. As part of the surrender terms, each district agreed to send one boy and one girl to appear in an annual televised event called, “The Hunger Games.” The terrain, rules, and level of audience participation may change but one thing is constant: kill or be killed. When her sister is chosen by lottery, Katniss steps up to go in her place.

Now I mentioned, the Mind Games recommendation led me to reading this book. I expected urban fantasy. After the first page or so, I realized I was getting something else–young adult (YA). As I mentioned in my previous review of the Iron King (review here), YA is a new genre for me. I was a little apprehensive, but I read on, unsure of what I would get.

One thing for sure, I immediately connected with the characters. I didn’t know what the “Hunger Games” were, but by page 13, I wanted to cry for the children. They lived a hard life but made the best of it. More than that, they flourished in their own ways despite being in an environment which would break a lot of people.

When I did learn about the “Hunger Games” I was appalled. Ms. Collins brought the incomprehensible to life. This novel was high on the list at goodreads.com as one book people would like to see made into a movie. I could see why. Yet it didn’t take me long to realize I don’t want to see this made into a movie. The book was just too touching…heart-wrenching to cheapen it on the screens. I spent a lot of time blinking back tears.

I’ve heard a lot of critters say to lay off the back story. It’s a rule Ms. Collins did not follow, and I’m glad for it. Each bit of back story was a treasure, rich in a way which added depth to her characters. I savored every moment.

As for the YA aspect, I thought the novel was very age appropriate. It’s a novel I’d let my daughters read. Though there was a lot of violence, each choice had real consequences. Decisions were not made lightly, and Katness was very aware of the stakes. It broke my heart her world wasn’t one of innocence. It reminded me of the easy life I take for granted. For them, it was as if every small kindness was the greatest miracle.

This was a book I didn’t want to put down. Now I wonder if I have the heart to pick up the next.