I remembered that I stopped reading Dark-Hunter novels because the superpowers Asheron had took away the challenge. I picked up this book anyway. I figured I’d been out of the reading scene for so long that I’d be able to give this book a bit more of a fair chance than I would have years ago. Before I force my opinion on you, let’s start with the blurb. 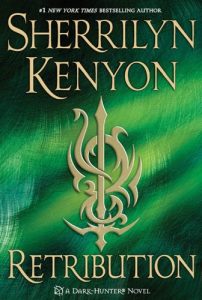 A hired gunslinger, William Jessup Brady lived his life with one foot in the grave. He believed that every life had a price. Until the day when he finally found a reason to live. In one single act of brutal betrayal, he lost everything, including his life. Brought back by a Greek goddess to be one of her Dark-Hunters, he gave his immortal soul for vengeance and swore he’d spend eternity protecting the humans he’d once considered prey.

Orphaned as a toddler, Abigail Yager was taken in by a family of vampires and raised on one belief—Dark-Hunters are the evil who prey on both their people and mankind, and they must all be destroyed. While protecting her adoptive race, she has spent her life eliminating the Dark-Hunters and training for the day when she meeting the man who killed her family: Jess Brady.

A gun in the hand is worth two in the holster…

Jess has been charged with finding and terminating the creature who’s assassinating Dark-Hunters. The last thing he expects to find is a human face behind the killings, but when that face bears a striking resemblance to the one who murdered him centuries ago, he knows something evil is going on. He also knows he’s not the one who killed her parents. But Abigail refuses to believe the truth and is determined to see him dead once and for all.

Brought together by an angry god and chased by ancient enemies out to kill them both, they must find a way to overcome their mutual hatred or watch as one of the darkest of powers rises and kills both the races they’ve sworn to protect.

This book is a bit different than I expected. It still had the Dark-Hunters and all. However, the mythology was more Native American than Greek, as is the common style I’d expect from a Dark-Hunter book. The fusion definitely gave it a different flavor and a more unique quality than the older books. I’m not quite sure if I’m into the new style though. Different, but with change, it takes time.

I felt this book was more centered around the character relationships than action… apocalypse. I honestly don’t remember the style of the other books. Were they more character driven or more action driven… were they balanced? I don’t know. I just can’t remember. Being that this seemed more like character driven, the apocalypse seemed less urgent than it should have been. After all, we were facing the end of the world in this book. Shouldn’t we be a bit more panic stricken? 🙂

It might have been the comedy also, which brings me to the characters. They characters took very little seriously. Everything seemed like a bit joke… even when they were obviously damaged. I suppose it was there way of dealing with life. In a way, I can relate. I have a tendency to smile when I’m nervous. I hide behind my smile. I don’t know if it looks genuine, but the smile makes me feel better, so I go with it. I’ve been known to smile in the most awkward situations. One time, I had my smile on as I listened to a guy I hadn’t seen for awhile catch me up to date on his happenings. Out of the blue, he hops into how his parent died of cancer. I didn’t even know what to do with my face. Anyway… that’s the feeling I got with all the comedy. Making jokes about life was equivalent to my nervous smile.

This time around, it seemed like the cast of a thousand characters. Who wasn’t there? I don’t know. I don’t remember most of them, so the reintroduction was nice. I even got to see Nick, who I did remember. I would love to see more of him. He’s rather surly. I suppose with good reason. Really, it’s time to patch up Nick though. I’d like to see him get his own story, if he hasn’t already. Maybe if I keep reading the series, I’ll catch up to his story. After all, I am behind a few.

The main characters… Jess Brady (Sundown) and Abigail Yager. Hmmm… They didn’t strike me as anything significant. It was odd to see Jess dating the great granddaughter of his fiancee. In fact, it was a bit creepy, if you ask me. But hey… I suppose they weren’t technically related.

My favorite part of the entire book was the bonus chapter. I know it wasn’t the main story… but it actually had me excited in a way the rest of the book didn’t. Over all, I give this book a 3.5 out of 5.

*I picked up this goodie from the library. I’ll have to check to see if the next one is available.