Right after Dark Skye, I couldn’t stop myself from downloading Kresley Cole’s next book and begin reading. Again, I devoured it within 24 hours. I feel like my old, pre-2013, book-obsessed self again. Before I get to my review, which I hadn’t planned on doing before today, how about a blurb: 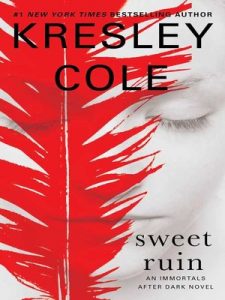 A foundling raised in a world of humans
Growing up, Josephine didn’t know who or what she was—just that she was an outcast with strange powers. Protecting her baby brother became her entire life. The day he was taken away began Jo’s transition from would-be superhero…to enchanting villain.

A lethally sensual enforcer on a mission
Archer Rune the Baneblood never fails to eliminate his target. In his sights: the oldest living Valkyrie. Yet before he strikes, a vampiric creature pierces him with aching pleasure, stealing his forbidden blood—and jeopardizing his brethren’s secrets.

A boundless passion that will lead to sweet ruin…
Could this exquisite female be a spy sent by the very Valkyrie he hunts? When Jo betrays the identity of the one man she will die to protect, she and Rune become locked in a treacherous battle of wills that pits ultimate loyalty against unbridled lust.

Reading this book made me feel like I could write again. I started to understand why I hated my Advanced Creative Writing course so much. The book I was writing was boring… dull… there was nothing at stake. Now Sweet Ruin, it had things at stake. It made me want to rewrite my entire novel and start over for my writing class. Enough about me, let’s talk about Sweet Ruin.

Josephine, my gal was new to the Lore. Didn’t even know what she was, in fact. However, she was magnificent when it came to powers. I loved that she knew herself and was unapologetic about it. If you’re looking for a strong female lead, she’s it. She was so rough around the edges, she could cut you with a light brush.

My hero Rune was equally captivated. I’m starting to see a pattern with Kresley Cole male characters. The females seem to be stronger (mentally) than the males. I rather like it. It makes the males quite charming and vulnerable. They’re still incredibly masculine and macho, but vulnerably charming in a way that they need their egos stoked.

Sex between our stars was pretty hot, or rather the foreplay (you know how Kresley Cole is with making her characters wait). Josephine and Rune had major chemistry… explosively orgasmic. I really liked those two together.

The Storyline… I’m beginning to think Ms. Cole will never move the series forward. Though the characters and story were interesting, it did little to progress the Ascension forward. However, it did introduce some key players. Rather than the fight being between the Vertes and the other guys (the Horde? maybe), I see now it’s a much bigger fight. I’m beginning to think it’s between Nix and her Gaia (Earth folks) and The Morior (lead by Orion).

What I like about Nix and Orion is that they seem like worthy adversaries. A while back, I was big into the Blackdagger Brotherhood series by J.R. Ward. However, the villains were all idiots and had no chance. Likewise, Sherrilyn Kenyon’s Dark-Hunters series puttered out for me also, once Ascheron became all powerful. Even though Kresley Cole seems to be in a rut in terms of moving the series toward the big finale, she’s managed to keep it entertaining by keeping her characters pitted against worthy adversaries.

My rating for this book is more on the 4/5 side.