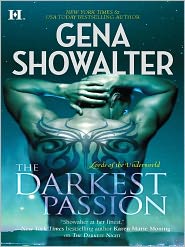 When I first opened the Darkest Passion by Gena Showalter and got another glimpse of Paris, I have to admit…I wanted his story more than ever. I even hoped his story might be told in Aeron’s book. I didn’t even care if he got a complete story just as long as I knew his outcome. Yeah…silly and short sighted.

Then I got the inside track to Aeron’s mind and the effects his demon had on him. Oh my word! I had no idea Aeron suffered as he did with his demon. It made me reassess my feelings about Paris’ book. I’m holding out, because I want the whole story. I heart U, Paris!

Of course I’m getting a head of myself. The teaser from Showalter’s website:

For weeks, the immortal warrior Aeron has sensed an invisible female presence.  An angel–a demon-assassin–has been sent to kill him.  Or has she?  Olivia claims she fell from the heavens, giving up immortality because she couldn’t bear to harm him. But trusting – and falling for – Olivia will endanger them all. So how has this ‘mortal’ with the huge blue eyes already unleashed Aeron’s darkest passion?

Now, with an enemy hot on his trail and his faithful demon companion determined to remove Olivia from his life, Aeron is trapped between duty and consuming desire. Worse still, a new executioner has been sent to do the job Olivia wouldn’t…

This review starts out snarky, but I swear it tempers down and ends on a good note. 🙂 Maybe.

Olivia quickly annoyed me. She was prone to childish tantrums and sobbed so much I wanted to slap some backbone into her. One thing I can’t stand is groveling females. I couldn’t understand what the Deity saw in her that she’d grow gold in her wings. The girl needed to grow some balls is what she needed. She had me screaming at the book.”Act like a warrior angel, damn it!” Then there was the manipulating bitch thing. Yeah, her thoughts were sweet and innocent, but if I’d encountered her in real life, I wouldn’t trust her as far as I could throw her. Okay, let’s just say the girl rubbed me all wrong. Like Lysander, she acted naïve, but it came across to me as just plain dumb. So those were my first impressions of Olivia. I will say she grew some backbone in the end. Thank the Deity!

Aeron really stood out as nothing significant to me. As far as demon versus man, the style was very similar to the prior books. He spent time convincing himself that he couldn’t be with Olivia because his demon was bad. Of course his demon was crazy for Olivia and calmed by her, just like the other LOTU and their ladies. Really, it was nothing new under the sun. I had to remind myself that Aeron didn’t read the other LOTU novels, so he wouldn’t know the other Lords had gone through the exact same internal combats with their demons. Still, would be nice to see something new.

And the wild card—Legion. I absolutely loved the little demon—well not absolutely. But I liked her a lot. Even when she was getting on my nerves, she had an entertaining quality about her. I definitely hope to see more of her in the future. In fact, I have some speculations about her and her own Happily Ever After (HEA). She’s definitely my presshusss.

One thing I didn’t understand was the concept of love in Heaven. Everyone loved everyone in Heaven, so Olivia said. Yet, most seemed lacking in compassion and cold—heartless beings. Sure they forgave on a dime, but without emotion. It’s easy to forgive when you don’t care. That’s not love.

What’s the best way to lose Reena as a reader? Simple. Give me a side plot not told from the POV of a main character.

The book totally grabbed my attention at the end of chapter 6. I was stoked! In my excitemen,t I looked to the next page and what did I find? The dreaded secondary character POV. Mentally I groaned. I flipped ahead to find out how long I had to wait to hit chapter 8 and hopefully get back into the action–nearly 20 pages! I tell you the truth. I put the book down and went to bed. I woke up, read chapter 7 (which was actually quite interesting, btw), and was back in the story. The book really only continued to get better.

Now this is the twisted me coming out. 🙂 Many people read romances because they’re guaranteed a HEA. And really, that’s what I hate about romances sometimes—the impossible HEA against all odds. Olivia and Aeron got their HEA, but I didn’t like it. Keep in mind, I often cheer for the not so HEA. I so hoped for an imperfect solution. You romance lovers get what you want though, and I suppose that’s what matters. GRRRR!

So, I had complaints. Yeah, but character interactions and twists kept my nose in the book (particularly after chapter 6). The story was action packed and full of revelations. If you’re following the LOTU, this is definitely not a book you want to skip.

Now a few things that had me wondering.

Often I have favorite quotes. Today I present the darkest moments. 🙂

Keepers of Lies is next, and honestly, I was dreading it. Listening to Gideon say the opposite of what he means totally gets on my nerves. Even his comebacks suck. Then I realized Gideon knew how lame he really was. Yeah…I want to see what’s up with him.

0 thoughts on “Novel Review: The Darkest Passion by Gena Showalter”