Monday kicks off the ILYF blog tour. I’ve decided to save that day just for little ole me… well, and ILYF. So today I’m doing an early review. I’d actually put off Ultraviolet by R.J. Anderson for quite some time. I received a copy from NetGalley, but for some reason, I had it in my head this book had received poor reviews. Well, I looked at the five books on my I’ll be reading one of these books next! and found the top two weren’t set to release for a few months. Working my way down the line, I hit Ultraviolet. Hmm… I figured I’d at least open it up. Wouldn’t hurt to read a few pages just to get it off the list. Right? Right! So the blurb from Ms. Anderson’s website:

Once upon a time there was a girl who was special.
This is not her story.
Unless you count the part where I killed her.

Sixteen-year-old Alison has been sectioned in a mental institute for teens, having murdered the most perfect and popular girl at school. But the case is a mystery: no body has been found, and Alison’s condition is proving difficult to diagnose. Alison herself can’t explain what happened: one minute she was fighting with Tori — the next she disintegrated. Into nothing. But that’s impossible. Right?

First things first: I loved Alison. Most of the YA novels I read have female protagonists who are weak. Their problems are self-generated and folks take advantage of the situation, knowing the protagonist is a yessir character. Not so with Alison. Sure, she had problems — unique to her — but reasonable when considering no life is problem free. And though she could always use a bit of help getting to the next stepping stone (like anyone), she wasn’t beyond doing what was needed to get the job done.No one had to talk her into standing up for herself; no one had to tell her when she was being mistreated. Yay! for strong protagonists.

The storyline intrigued me all the way through. Alison had two main problems to resolve: get out of the mental institute and figure out what happened to Tori. Though it was a given she would resolve both issues, I had no idea how she’d accomplish the tasks. One thing for sure, the ending was quite unexpected.

The way the story played out really made me wish I had insight into the author’s mind. Did she know the ending before she started putting words to paper and write the story to meet the ending? Did she reach a point while writing and realize at some point she needed a reasonable conclusion? Is she the type of author who alternates from beginning to end until the two meet in the middle?

Why do I mention this? Well, the ending was a bit odd. Without giving any spoilers, I will say there was a definite shift in the genre for the conclusion of the book. Not sure I was all too fond of the switch, but the over all story ended well — hopeful, but imperfect, which is just they way I like.

The only thing I wasn’t all too fond of were the flashbacks. I can’t say they were unnecessary. However, they did interrupt the flow. I started this work August 5 and finished August 7. There were times I couldn’t put the book down. In fact, once I stayed late and into the early morning, greeting the sun reading this work. However, I got to a flashback and had no problem stopping. If not for the flashback, I’m sure I would have finished Ultraviolet that morning/day… it was that good. 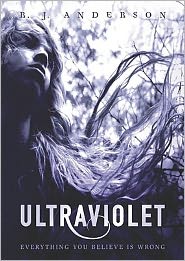 You can find Ultraviolet by R.J. Anderson at the following locations: