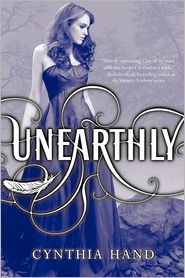 Unearthly by Cynthia Hand was recommended to me at least twice. The first time I received the recommendation, it hadn’t been released yet. So, I put it on my to-read list, thinking I may or may not get around to it when the time came. Really, it was one of those books which barely hit my radar. I’m not even sure I read the blurb. At least, I don’t remember the blurb. A month or so later, the book-buying bug hit me again. I put out my typical “what should I read?” request on twitter and Unearthly came up again. Alright… I’ll give it a try. First, the blurb from Ms. Hand’s website.

Clara Gardner has recently learned that she’s part angel. Having angel blood run through her veins not only makes her smarter, stronger, and faster than humans (a word, she realizes, that no longer applies to her), but it means she has a purpose, something she was put on this earth to do. Figuring out what that is, though, isn’t easy.

Her visions of a raging forest fire and an alluring stranger lead her to a new school in a new town. When she meets Christian, who turns out to be the boy of her dreams (literally), everything seems to fall into place—and out of place at the same time. Because there’s another guy, Tucker, who appeals to Clara’s less angelic side.

As Clara tries to find her way in a world she no longer understands, she encounters unseen dangers and choices she never thought she’d have to make—between honesty and deceit, love and duty, good and evil. When the fire from her vision finally ignites, will Clara be ready to face her destiny?

Unearthly is a moving tale of love and fate, and the struggle between following the rules and following your heart.

I almost gave up on this one early. I’m glad I didn’t. It started well. The stakes were practically set on the first page. I was mildly interested. Then the story dragged until page 40ish, and I feared the entire book would be a snoozer. I’m an impatient sort of reader. I have too many reads on my shelf to bother with the dull ones. But folks had raved about this book. I was afraid of giving up too soon. So I pushed through, and around page 60 I was hooked.

The way I judge if a book is good is if I can move past the tendency to critique and just enjoy the story. From page 1-40, I was in full critique mode, constantly rewording each sentence, substituting words, rearranging paragraphs, make cuts… Yeah. I had it bad. After page 60, I was too involved in the story to nitpick. 🙂

I hated Clara at first. For a book I truly enjoyed, that was quite odd. My dislike of the main character really didn’t detract from my enjoyment of the book. For the first half of the book or so, she struck me as a spoiled brat, and the sad thing about it was she didn’t even realize it. She just seemed like a user. Ugh. I suppose that was a good thing. I always enjoy a book with great character development and growth, and she had a long way to go to be likeable. The novel had picked up to have me stick with it, but I’d hoped to see Clara transform into something wonderful. What I found was Clara was one of those gals who seemed to change personalities according those around her. Not a bad thing but not good either. The verdict is still out on that one. 🙂 I will admit, toward the end, the gal wasn’t so bad.

A quick rundown of the rest of the characters. Loved Tucker. Digged Wendy. Christian was just okay. Angela was… not quite sure I liked her. Jeffrey–I didn’t see too much of him, but what I did see of him, I wasn’t exactly fond of. HOWEVER, I do want to see more of him. I so hope his story is next, cause I’m quite curious about that fella. Loved Mom and hope to learn more about her. For a cast of thousands, Ms. Hand did an excellent job giving each character a unique personality.

Plot wise: Wicked awesome. Yeah, it started slow, but the rest was enthralling. And the humor was great. It wasn’t slap stick, which irritates me. It was more on the lines that sometimes real life is just funny–the little things that go wrong that bring a chuckle.

One thing for sure, I had a bunch of favorite lines. 75% of my notes included lines I loved.

If this novel had a stronger start and a more likable character, it might have made it to my 2011 favorites. Still a great read though. Once my daughter finishes The Hunger Games, I’m pushing Unearthly next.

I see Ms. Hand has her next title (Hallowed) scheduled for 2012. Long wait, but definitely a work I’m looking forward to.