As soon as I finished What a Boy Wants by Nyrae Dawn(see review here), I couldn’t stop myself from purchasing What a Boy Needs. I just loved the first in the series so much. I’m a hopeful one. Could Nyrae Dawn do for Jay what she’d done for Sebastian? Let’s cross our fingers she did. Before the review, the blurb: 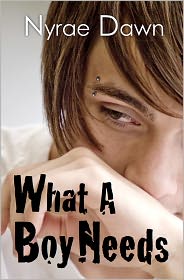 Jaden Sinclair knows he’ll never amount to anything…so why would he deserve a girl like Priscilla Mendoza?

After getting a huge bomb dropped on him, Jaden lashes out and lands himself in jail. Everything in his chaotic life is turned upside down and to make it worse, his mom kicks him out in order to side with his dad. Yeah, he’s totally a prize for a girl like Pris.

Sebastian, Aspen, and Pris are all going places in their lives…and he knows he can’t keep tagging along for the ride.

The group has one last chance for The Epic Adventure they’ve been looking for: a road trip to New York, where Jaden’s friends will be going to college. Unfortunately, the more time Jaden hangs around Pris, the harder it is to keep the carefully constructed walls between them so she doesn’t find out what a train wreck he really is.

When the trip ends, Jaden has to decide if he’s ready to say goodbye to his friends, and the girl he loves. He knows what he needs, but will he be man enough to go for it?

So now that I’ve ruined the surprised, what exactly did I like about What a Boy Needs.

The Boy Jay: “Fake it till you make it” seemed to be his motto. The words he verbalized were so different from what he truly felt inside. My heart broke for him. I know what it’s like to put on a smile when downer emotions are twirling inside. It’s tough. And Jay did it every single day. I don’t know how he managed some days. I could see myself barring the door to my room and shutting the world indefinitely.

I loved Jay’s struggle with his home life. Well… not gleeful he had struggles, but what his struggles did for the book. I was lucky to land parents who believed in me and encouraged me. It’s easy for me to get wrapped in my own little world and be oblivious to the struggles of others. Nyrae Dawn made Jay’s home life real. Despite my background, I could understand the trials he faced… I truly felt for his situation. *I* wanted to encourage Jay and tell him he was important, loved, desired… that he had a future.

Because Jay had real problems… emotional problems, not just “get the girl” like in What a Boy Wants, the story meant more to me. I looked forward to Jay growing… finding and accepting his true self, trusting in others.

Definitely a worthy sequel to What a Boy Wants.

So I promised another giveaway, but first let’s knock out the winners from the last giveaway. What was up for grabs?

Three Winners: Will receive an eCopy of What a Boy Wants by NyRae Dawn.

And the Winners are!

Emails will be sent shortly.

If you haven’t entered the second giveaway on the INDIEpendence Blog Fest tour, what are you waiting for? Go do it!

0 thoughts on “Novel Review: What a Boy Needs by Nyrae Dawn + Giveaway”