After reading 3 books in the last 4 day, I’m trying to convince myself to pace myself… to slow down. Then again, I won’t have as much time next week as I do this week, since I’m in a spring break session. 🙂 It’s been almost a full 24 hours sense reading Wicked Abyss. I’ve set reading aside a bit so I can catch up on homework. I’m enrolled in a different college in a different state than I’m teaching. Spring break for college was last week. Spring break for teaching is this week. Go figure. 🙂 I never really got a full break, but having a lighter load definitely has relaxed me. So, about this Wicked Abyss. Again, I didn’t take notes. I didn’t think to do reviews until after I finished this book. Next time around though… for sure. The blurb first. 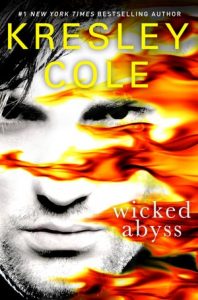 The terrifying king of hell…

As a boy, Abyssian “Sian” Infernas had his heart shattered by a treacherous fey beauty who died before he could exact vengeance. Millennia later, a curse has transformed him into a demonic monster–just as she’s been reincarnated. Sian captures the delicate but bold female, forcing her back to hell.

Princess Calliope “Lila” Barbot’s people have hated and feared Abyssian and his alliance of monsters for eons. When the beastly demon imprisons her in his mystical castle, vowing revenge for betrayals she can’t remember, Lila makes her own vow: to bring down the wicked beast for good.

As Calliope turns hell inside out, the all-powerful Sian finds himself defenseless against his feelings for her. In turn, Lila reluctantly responds to the beast’s cleverness and gruff vulnerability. But when truths from a far distant past are revealed, can their tenuous bond withstand ages of deceit, a curse, and a looming supernatural war?

Lila, our heroine was a spunky one. She definitely had spice to her, and I loved it. She could not be cowed. Kresley Cole tends to write such strong lead female characters. I think that’s why I love her books so much… well, that and the men are big teddy bears to their mates, while being hardcore kickass and sexy as hell.. I love that too. Lila fit right in with the other female characters. In fact, I’d say she was more daring then some of the others… and smart. Brains and beauty. I love it. Unlike some of the other female characters, she couldn’t fight (physically) at all. Or at least, I don’t recall her even trying. She used her strengths (knowledge and intelligence) to her advantage.

Our demon boy, Sian was like a lot of Kresley Cole’s other men…. a bit broken in side. Not so much broken, but his self-esteem had been destroyed. However, he was all-powerful in his dominion. Interestingly, he seemed to cater a lot more easily than most of Kresley’s other male leads. He was the biggest pushover ever when it came to Lila, even when it didn’t seem like that to Lila. I’m torn… I’m not sure how well I liked him overall. He wasn’t awful. Rather, he just didn’t stand out as Kapow! in my mind.

The storyline was okay. When I think about it, there didn’t seem to be a lot at stake. This book seemed to build on the Morior… introducing characters and really giving a chance to know the other side. I like getting to know the Morior. However, I think it would be nice to push the story toward the Ascension also. This series has REALLY stalled. Ever since the characters ended up on Torture Island, I don’t feel like this series has really gone anywhere. Love the stories, but I’m eager to see some action that’ll rock the boat.

I’ll give this one a 4 also. The chemistry between the two was great and I’m still in the reading mood. Oh… I feel so me… the way I should be.

The next story in line is Shadows Seduction. However, I’m thinking I might skip it. It’s a M/M romance. I read the sample, and it doesn’t really pique my interest. I’ve read a few M/M romances and they can be hot. I’m not in the mood for now. Maybe another time. It looks like Kresley Cole has been releasing books in the Immortals After Dark series every year about this time. Hopefully she’ll have her next release soon. Fingers crossed!