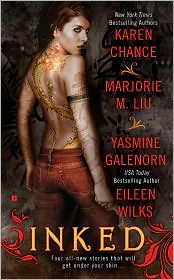 I won Inked in a giveaway hosted by Reading Angel. Thanks again! This book is actually an anthology featuring four authors: Karen Chance, Marjorie M. Liu, Yasmine Galenorn, and Eileen Wilks. As of yet, I’ve only read the first story, Skin Deep by Karen Chance.

“It felt like I was simultaneously getting too much information, and not enough.” Though the words are Lia’s, the main character, they mimicked my thoughts about Skin Deep exactly. In fact, I ended up reading the first chapter twice because things moved just a little too fast for me. Later, I read this was the third in a series of short stories. So I’m guessing Ms. Chance used the first few pages to catch the readers up. Once I got over the information overload, I settled nicely into the story. Just for the record, this can be read as a stand alone novel. All the information was there to allow me to enjoy the story despite never having read a work by Karen Chance. So, the snippet from Ms. Chance’ Website:

I’m not really familiar with the urban fantasy (UF) genre, and I’m just starting to read more stories in the first person narrative. Skin Deep has both. As far as the first person, I found it to be quite snappy. Ms. Chance has a way with words which makes the reading highly entertaining. The humor was unexpected and had me laughing throughout the story. In terms of UF, it was a nice change from my normal paranormal romances (PR). The story was plot driven rather than romance driven. I liked it. A lot! I’m not ready to put down the PR, but it was still an interesting read.

Lia was quite a character–bold, adventurous, and quick on her feet. You’re not going to find the damsel in distress with this gal. No way! “I put two bullets in it before I knew it wasn’t moving.” The gal took shoot first, asked questions later literally. And boy could she take a beating. And I’m not talking about the Sookie Stackhouse beatings where she’s lying half dead in the corner. I’m talking about taking a powerful blow, getting up, and teaching her assailant a lesson–the kind that leaves them bagged, tagged, and six feet under. Have I ever mentioned I’m terrified of spiders…oh and dirt. Okay, not really terrified of dirt, but it still causes me quite a bit of anxiety. Lia probably doesn’t even know what I’m talking about. The girl floated down sewers like she was a turd and hardly flinched. I don’t even think she’s heard of the term girlie.

Skin Deep had a handful of other minor characters. However the one which made the greatest impression on me was Cyrus, Lia’s love interest. He had a very small, but important role. I really felt for him. As an outcast (vargulf) he had no one to call his own. It was really kind of sad. And because of his status, I sympathized with all of the vargulf werewolves. I didn’t know how the vargulf landed in their situation, and really I didn’t care. The need to belong while receiving rejection turned me into a vargulf sympathizer. Only thing, I still don’t know how Lia got away with dating a vargulf. Perhaps it was addressed in an earlier novella.

A bit of a side note about one line which totally stood out with me. “To whom do you belong?” First off, good job being grammatically correct Ms. Chance. I loved it. This line also hit a resonance with me because of my mother’s home town. Just as Cyrus wanted to know a bit of lineage, same thing happens when I visit my mother’s home. The town is so small, practically everyone is related. Since my visits were infrequent, guys thought new face = fresh meat. What they didn’t realize was I was most likely off limits.  Before I was married, my first question to any guy who tried to pick me up was “Who are your parents? Grandparents? Family?” No kissing cousins here.

Back to the story. 🙂 Remember I mentioned Lia’s boldness. Well, it seemed just about everyone in the story was a bit on the wild side. It went to the point of recklessness at times. I felt like I was reading a story based upon a video game where the characters know they have extra lives and redos. They jumped into the fray without consideration they might just die. People running off to save the day without backup…it was crazy! Honestly, it seemed unrealistic at times. I just found it hard to believe everyone had hero syndrome.

Another issue which bothered me was the shields. I understood the protective barrier element. Repelling nasty stuff, absorbing damage–that totally worked for me…well to a point. It’s like this. If I’m riding in a car, I’m protected by cute metal and glass. Bugs can’t get me, birds can’t slap into me, and rocks can’t pelt me; I’m pretty much safe. But if my car hits a tree, I’m going to get rattled. I’m going to feel it. We had mages flying into walls, being pummeled, and all sorts of high impact activities. Yet the shield protected them from the collisions to the point they just shrugged it off. I didn’t like it. I guess that’s why the characters acted like they were invincible players in a video game.

I’m not going to give away the ending, but I will say I would have liked a different one. Well, not exactly a different ending, but a better explanation for the outcomes. Up until the last chapter, I really enjoyed the storyline. It led to a bold finale, which was quite fitting for Lia’s personality. Chapter 13 (the last chapter) provided the explanation. Honestly, it seemed a bit of a sloppy solution in my opinion. I’m not even sure an explanation like that was necessary. It seemed like an info dump to me. Still the overall novella was quite fun.

One area I really enjoyed were the sensual scenes. I know a lot of novellas skimp in this area. Ms. Chance did a nice job here. It makes me wonder how deep she goes with a novel length story. I’d certainly like to give her a chance. Any suggestions?