Welcome to the next stop on the

Today, William Todd Rose is here to share a bit about himself and his book, Seven Habits of Highly Infective People. Woot.

Reena Jacobs: Congratulations on your latest release, The Seven Habits of Highly Infective People. I understand it’s a revised and expanded version. Please tell us a bit about it, and what led you to release it. 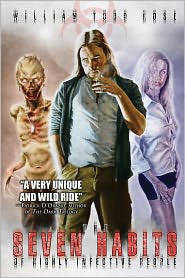 William Todd Rose: The first edition was independently published and was only on the market for around a month or so before Permuted Press asked if they could see the manuscript. I’ve always loved Permuted and had planned on submitting something to them in the future, but I always felt like I wasn’t quite ready. So, needless to say, I was thrilled when they said they wanted it. The only issue was the word count. The original version was about 25,000 words shorter than their minimum requirements, so they asked if I thought I could expand it a bit. This really wasn’t that much of a problem. When I wrote the original version, I thought it was a one shot tale. But after publication, I realized that The Seven Habits was actually the first book in a much longer story arc, so I took this opportunity to include some seemingly minor details which will play very important roles in the rest of the series. The hardest part was figuring out exactly where to insert the extra content, as I thought the storyline in the first edition was pretty tight. Each chapter basically picked up where the last left off. As I reread the original and made notes, I realized there was one point in the tale where a period of time had passed for both Bosley and Ocean and realized this was be the perfect spot to add the extra scenes.

RJ: That’s totally awesome. I love it when agents and traditional publishers find indie authors. Really makes me believe in the process again. Congratulations! By the way, I cruised your blog. A bit on the… disturbing side. Love it!

WTR: Thanks! I’m ashamed to say that I don’t update it as often as I should. I’ve tried blogging several times before, but never really knew what to put in it. So this time around I decided to mainly write about what I consider to be the most interesting things which have happened to me.

RJ: I’m totally with you on trying to figure out new content. 🙂 I hear you have a “thing” for zombies. Will you please share with us your fascination with them?

WTR: To be perfectly honest, it’s not so much the zombies themselves which intrigue me but the world that would be left in their wake. I’ve always been interested in the psychological and sociological effects of a single, shared event. Something that would, almost overnight, create entirely new paradigms of survival and morality. I suppose I could have picked nuclear war or a natural disaster, but zombies are great metaphors, you know? They are Death incarnate: unsympathetic and relentless, they’ll just keep coming and coming until they finally get you. More than that, however, I like the additional emotional strain the undead would place upon those who survived the initial onslaught. The walking dead defy all the laws that constitute our collective reality. A pandemic, for example, would be easier for survivors to rationalize. Disease conforms to our agreed upon reality. But seeing hordes of rotting corpses wandering around the landscape would be a constant reminder that the world as we knew it was over. At the same time, it would also topple mankind from our coveted position at the top of the food chain. We’d become prey again and be thrust into roles we haven’t had to fill for a very, very long time.

RJ: Yikes! You’re delving into an area where I start to have nightmares. What got you into speculative fiction?

WTR: In all honesty, it was reading. For as long as I can remember, I’ve always loved sci-fi, horror, and adventure tales. Books were the best gift I could receive on any given holiday and even as a young boy I had quite an extensive collection. It didn’t take long for me to realize that I could write these types of stories myself and eventually I realized that I was actually pretty good at it.

RJ: Where do you get inspirations for your stories? WTR: It’s really hard to pinpoint. Most of them just evolve organically. My first novella, “Shadow of the Woodpile”, was all stream of consciousness type stuff. I watched the story unfold without really knowing where it was going until I reached the end. For my second book, “Cry Havoc”, all I knew was that I wanted to start with a scene showing a city embroiled in urban warfare. The only book I can really pinpoint a specific inspiration for is “Shut the Fuck Up and Die!”; my wife and I were watching House of 1,000 Corpses and I told her what I would love to see in one of those types of movies and she replied, “Well then, you should write it.” So I did. But that’s all I can say without releasing any spoilers.

RJ: I loved the trailers for your works. What was your role in the production of them?

I actually made and edited all of them myself. For The Seven Habits trailer, I used stock footage and a song from the German band Lacrimso. For the Cry Havoc trailer, I digitally composed the music using Fruity Loops Studio and edited various images which I felt conveyed the tone of the book. If you watch that trailer, you may notice some black and white images in which I’d added a bit of yellow to certain details with Photoshop. Though I never come right out and said it in the novel, yellow is a very important color in that book. You could probably read through it and never notice. But if you re-read it and pay specific attention to things that are yellow, you’ll begin to see patterns emerge based on that color. So I felt it was very important to have yellow in the trailer. For the Sex in the Time of Zombies trailer, I cannibalized some stills from Night of the Living Dead since its in public domain and colorized them in the same way I’d added yellow into Cry Havoc.

RJ: Very cool. What are you working on now?

WTR: Right now I’m finishing up the second book in the Tides of Time series. It picks up right where The Seven Habits left off and I’m exploring some of the minor characters from the first book in a little more detail while still maintaining the focus on Bosley and Ocean. I wanted this one to be different from the first while still maintaining the rules which govern this particular universe. There’s not as much time travel in it, however Bosley is transported and trapped in the future by a mixture of mysticism and quantum mechanics. It’s based on the theory that a single particle can exist simultaneously in two different locations. He psychically exists in his present and the future simultaneously. Since the particles which make up his body are entangled, anything which affects his body in one timeline also affects his body in the other.

In addition to this, I’m working on a collaborative novel called Black Rain with author Carl Hose. It has that sci-fi/apocalyptic-horror vibe that I really dig. We’re basically taking an alien invasion scenario and stripping away all the technological aspects of it. There are no ray guns, no shining saucers hovering over the nations of the world. Our invaders, for want of a better word, are primordial creatures who’ve come to earth by chance instead of design. Being natural predators, they do what they do best… hunt for game. In this case, the prey just happens to be human.

RJ: Alien Nation meets Predator comes to mind. I like it! Do you have any advice for other writers?

WTR: Be true to your voice and vision. It’s okay to be inspired by other writers, but make sure the story you’re telling is yours and yours alone. At the same time, realize that not everyone out there is going to dig what you’re doing. You’re going to get bad reviews sooner or later, but don’t let those discourage you. If you find the negative reviews weighing on you, remind yourself of this: on Amazon.com, the King James version of The Bible only has a four star rating… and that was supposedly written by God. So, as my wife says, there’s that….

RJ: Awesome point. 🙂 Anything special you’d like to say to readers?

WTR: I want them to know how much their loyalty and purchases are appreciated. Because of them, I’m able to dedicate even more time to doing what I love; that they would devote their time and money to the stories I’ve created isn’t taken lightly and never will be. So thank you to each and every person who has ever read my work. The importance of my readers in the writing equation will never be taken for granted.

Thanks a bundle for stopping by, Mr. Rose.

Thanks for having me! It’s been a blast! Named by The Google+ Insider’s Guide as one of their top 32 authors to follow, William Todd Rose writes speculative fiction that lends itself to the dark, and often surreal, realm of the macabre. With short stories appearing in numerous magazines and anthologies, his longer works include The Seven Habits of Highly Infective People, The Dead and Dying, Cry Havoc, and more. For more information, including links to free fiction, please visit the author online at www.williamtoddrose.com

Don’t miss the rest of the blog tour!