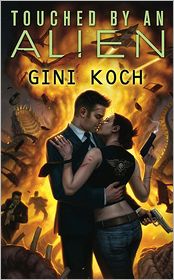 When I’d first heard about Touched by an Alien by Gini Koch, I was really excited. It truth, I didn’t even know Sci-Fi romances existed before I came across this book on a blog. I was intrigued and started putting my hat in for drawings. 🙂 After many many entries, I finally won this from Monica at The Bibliophilic Book Blog. I cannot tell you how excited I was to receive this book. I bumped it straight to the head of the line of my to read list. So, the blurb from Ms. Koch’s website:

Marketing manager Katherine “Kitty” Katt joins forces with gorgeous aliens from Alpha Centauri to protect the Earth, kick evil alien butt, and save the day with hairspray and rock and roll – not necessarily in that order.

I really wanted to like this book. Honestly, I did. The first chapter started all tell and no show.  However, I pushed that aside, thinking it might just be a prologue labeled as the first chapter. It wasn’t. It was the writing style. That’s okay, I told myself. I’ve read a few books where the writing isn’t my style, but the storyline rocked enough to make me forget. I’d heard so many great reviews about this book, I was hopeful. How could I not be?

This was written in the first person from Kitty’s POV. I really had nothing against Kitty. On the other hand, I wasn’t cheering for her either. She was a tough cookie, I’ll hand her that. If you’re looking for a strong heroine, she’s your gal. But for some reason, I just didn’t connect with her. I’m going to hazard a guess and say it was because she was just too damned perfect. Not only did she not make mistakes, but she had a solution for everything. EVERYTHING. And let me tell you, the book was riddled with sticky situations. Kitty had plenty of time to shine in this novel. As for me, I look for characters a bit more flawed. I want things to go bad for them so they can show their strengths. I want them to have trial by fire. Speaking of fire, look at that cover! You’d think the gal’s been through hell and back. Not so. Kitty made the events in the story look like a stroll through the park. Add that to Kitty being a know-it-all, and well, I just couldn’t muster up any feelings for her.

Then there’s Martini. He rubbed me wrong from the beginning. The guy seriously had tunnel vision with the jump Kitty’s bones thing. There was no romanticizing. It was, Marry me, and I’ll fill your belly with my spawn. I imagine some guys think like that, but most are smart enough to keep their mouths shut and at least offer a rose here and there. On top of that, the aliens, including Martini were as lacking in common sense as Kitty was resourceful. Sure, the A-C were brilliant in the brains department. Give them an equation, and they could solve it in a fraction of a second. Have them apply that knowledge to an everyday situation, and they were stumped. Okay. Now that I think about it, they didn’t lack common sense. Kitty just seemed to connect two and two together without there being any leads whatsoever. So it kind of made the aliens look stupid.

As to the plot, it had potential, but the info dumps really slowed the entire story down. Something significant would happen, followed by 20-30 pages of folks catching Kitty up to speed. No action, no moving the story along, just pages and pages of info. I understand the purpose of story building, but I would have liked to see a bit more balance.

In terms of romance, yes Kitty and Martini had sparks flying and ricocheting off the walls. But from Kitty’s viewpoint it really seemed like a arbitrary first-come-first-serve kind of situation. All the aliens, she found hawt. I got the impression if any other alien had shown interest first, Kitty would have been fine to let that alien into her pants.

This is one of those novels I complained a lot while reading, but in all honesty, it wasn’t a horrible book. I can see the appeal others might have with it. It reminded me a lot of Men in Black but with a woman as the main character. The dialogue was quirky and brought many a smiles to my face. But in the end, it just didn’t fit my personal tastes. It was more of a bleh book. I didn’t feel like a total loser finishing it, but can’t see myself recommending it either.

🙂 I still left with a few favorite lines, though.:

I’m really happy with the arrivals this week. Both the novels are outside my normal genres but really pique my interest. First up! I’ve wanted Touched by an Alien for a while now. I’d never heard of sci-fi romances until I saw this book advertised on a blog. I’m not a fan of contemporary romance, and my interest in romances wasn’t  revive until someone introduced me to paranormal romances. Here’s the thing. I’ve read very few sci-fi novels. In fact, I can only think of two: Jenna Starborn and the Ender’s Game series. Okay, Ender’s Game is a series, not a single novel, but still. You get my drift. Anyway, I’m really looking forward to this book. As soon as I finish Darkest Lie, this one’s next. Thanks, Monica (The Bibliophilic Book Blog). This book I can see myself reading right after Touched by an Alien. I won Rampant for my second place entry on Melissa Barlow’s blog Surviving Writing a Book in her Zombie vs Unicorns contest. Go Team Unicorn! Yum! Apparently this novel is about killer unicorns and a young girl’s quest to destroy these useful beasts. If you follow this blog, you know I’m new to the YA genre. I’m thinking this will be a fun read. Thanks again, Melissa. 🙂