I’ll start by saying that I had mix feelings about this book. Pleasure was more of two and a half novellas spliced together rather than a full novel with a continuous storyline. It took me a while to warm up to the book, which is something I mentioned in my review of Rapture also. Anyway, the teaser from Jacquelyn Frank’s website (BTW, check out her new web design. It rocks!) 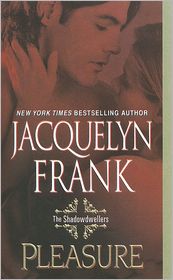 Beyond our world lies a land where darkness reigns—the land of the virile, sensual Shadowdwellers. Yet their mysterious abilities are no match for the power of desire…

As Chancellor of the Shadowdwellers, Malaya’s first duty is to her people. Her bodyguard, Guin, knows this only too well. For tradition’s sake, Malaya must marry, and the thought of this lush, vibrant, woman in a loveless union is impossible for him to bear. Guin loves Malaya—not as a subject loves his queen but as a man craves a woman. And even if he cannot keep her, he’ll show her everything she stands to lose…

Discipline. Penance. Order. A Sanctuary priest’s life revolves around such things. But when Sagan is taken captive and thrust into the Alaskan wilderness, he encounters a woman who challenges his faith and his self-control. Valera is a natural born witch who almost lost herself to the lure of dark magic. By rights, Sagan should shun her, but convention will count for nothing in the face of a passion that could change the realms of Shadowscape forever…

The story started where her last novel Rapture left off with Sagan. We find out what happened to him and meet his heroine, Valera. For me, Sagan played such an insignificant role in Ms. Frank’s other novels, I really had no interest in him. Unfortunately, the way the storyline played out, at the end I still had no interest in Sagan or Valera.

One item that continued to bother me with the Sagan/Valera story line was the lack of urgency. I had this issue with the characters in Rapture also. It reminded me of Stephan R Covey’s self-help book “The 7 Habits of Highly Effective People” in which he talks about the Time Matrix activities which includes four categories, urgent/important, urgent/not important, not urgent/important, and not urgent/not important.

For Nightwalkers, everything seems to fit into the two Not Urgent category, which doesn’t seem to make sense to me. Think about it. If our President’s life were in danger, it would be bumped to the Urgent/Important category. If someone kidnapped your child, it would be in the Urgent/Important category. There seems to be too much dinking around and sex when bad things are about to jack up their world. If the main characters don’t care enough to do something about a potential disaster, why should I?

Another other thing which bothered me about the Sagan/Valera saga, and I don’t think this is much of a spoiler since every romance has a scene where the hero and heroine part ways for whatever reason was their departure from one another. It reminded me of the old romances. “Run, Johnny. And don’t look back! You run as fast as your legs can carry you.” Kinda of cheesy, but oh well.

As the story progressed, I began to wonder where was Sagan? I couldn’t understand why no one had thought to bring him forth to ferret out the culprit with his mind reading skills. I don’t know. It didn’t jive with me. Sure having him use his powers would end the novel, but I still like things to unwind logically.

Then the dreaded side characters’ POV again. For Sagan/Valera’s story, I found no good reason to do it. It certainly didn’t add anything to the story for me.

For the most part, I read this wishing I was just a reader and had not learned techniques from other writers. It took away some of the joy out of reading as my mind continued to go into critique mode.

So what did I like about Sagan and Valera’s story? Funny thing, I’m not a cat lover. However, I loved the cats in her book. They definitely had attitude.

Guin and Malaya’s story I liked better and actually had been looking forward to it after the last novel. In many ways it touched me. I thought it awful to have the one you love romantically bump and grind another in your presence. It seemed odd at times, making Guin’s love more brotherly. It was hard for me to put myself in his shoes even though I sympathized with him.

As far as sex in the novel, I liked some aspects of it while others not so much. For instance, I found the characters thinking or talking too much without a lot of action. I always imagine good sex to be too sensual and breathtaking to have a coherent conversation. Not the case with Malaya and Guin. They had all sorts of conversation. And when not talking, they were heavy in thought. It made the time they spent in sexual exploring seemed more like an examination—just too clinical to blow my mind.

Drae and Magnus made a significant appearance in this novel. I’m not sure why, since they already had their story. Personally, I didn’t think the two deserved such a large role in a book featuring other stars. I don’t like the secondary character POV, but this area definitely made the exception. For once the secondary characters had more at stake (Drae and Magnus). It was definitely fitting to see the world through their POV. But then again, why did they have such a big role in this novel anyway? The shift pulled me out of the Malaya/Guin story. Even so, as a separate storyline, I thought it was well done. I would have loved Ms. Frank to pull something  like this in Rapture instead of this novel.

It brings to mind advice I found on Nalini Singh’s website. She suggested thinking of the most horrible thing you could possibly do to a character, and then do it. Awesome job, Ms. Frank! It truly brought out my empathetic side for Drae and Magnus. Only things, the details of how the culprit managed to accomplish the evil deeds were a bit sketchy. I would have liked the details brought to light. As it was, I really don’t believe the culprit could have gotten away with it all.

So, let’s fast forward! I may have problems getting into her books, but one thing for sure, Ms. Frank really knows how to write an ending. Kapow! I think this is why I continue to come back to her books. Her endings are so powerful it’s easy to forget the struggles of getting to the finish.

The Nightwalkers novels build upon each other. Definitely start at the beginning (Ecstasy) if you plan to read these books. My review of Rapture can be found here.

Normally I try to do some blog about writing on Friday. But since my post on Wednesday was more about writing, I’ve decided to jump out of the mold and do a book review instead.

It took me a while to get into this book. I’m not sure why, probably just preoccupation. I finally set myself to the task of reading it. And lucky for me, I found myself at the scene with the observation tower. I definitely took notice. So, the hook from Jacquelyn Frank’s website:

The Shadowdwellers live in a realm of darkness and sensuality, where order is prized and sin must be punished. Yet for Magnus, the head priest of Sanctuary, salvation rests with the one woman who will entice him into breaking his every rule…

SHE WAS HIS ULTIMATE TEMPTATION

Magnus is a man of contradictions—a spiritual leader in a deadly warrior’s body. Rules and order are for enforcing and visions must be followed—even if that means freeing a beautiful slave and making her his reluctant handmaiden. But she isn’t the only unenthusiastic partner. Betrayed once before, Magnus can barely bring himself to trust another woman

Yet everything about Daenaira’s fiery innocence compels him time and again to cross every line he’s ever drawn for himself.

Daenaira grew up hearing tales of the fearsome priest named Magnus. But no one can convince her that men of honor truly exist. She soon learns that Magnus is very real—every inch of him—and so is the treachery that surrounds them. Beneath Sanctuary’s calm surface, an enemy is scheming to unleash havoc on the Shadowdwellers, unless Magnus trusts in a union ordained by fate, and sealed by unending bliss…

I really enjoyed this novel. The political affair of the Nightwalkers is a central piece in all the Jacquelyn Frank novels I’ve read. This was no different. Oh the twisted webs we weave. Ms. Frank did an excellent job with the intrigue. I can’t say I had an idea of whodunit until the culprit stood up and said, I did it! One thing which did confuse me was villain behavior. Not sure why so many villains insist on letting their victims know they’re going to kill them before doing it. I know if I were a villain I’d so be into backstabbing.

I think I mentioned it once in Chatterbox, but I’ll mention it here again. Now this is just a preference thing. I’m sure others feel differently. However, I would have liked to have not jumped into some of the side characters’ POV. I’m sure their stories were important to the entire political aspect, but all I really cared about was the politics directly related to Magnus, not the twins. Any aspect pertaining to the Senate I would have liked to see from Magnus’ POV. But as I say, I’m partial to the main characters’ POVs only. Anything Magnus was not privy to could have been revealed from the stars of the next book, in my opinion. Especially since Pleasure is about Malaya.

I’m hoping the next book will be the last of the Nightdwellers series and bring closure to the politics. Not that I disliked the Nightdwellers, but one of the things I liked about Jacqueline Frank’s lines is the series don’t drag on forever. I like closure. If Pleasure is the ending, I definitely can see myself starting the next series she has called The Gatherers.

Overall, I really enjoyed this book!