Today we have Janice Seagraves, author of Windswept Shores, here to share with us. 🙂 First, I want to introduce you to her latest novel, Windswept. I totally love the colors on the cover. 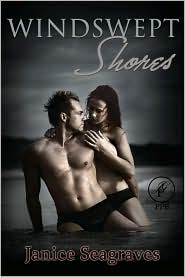 The sole survivor of a plane crash, Megan is alone on a deserted island in the Bahamas until she finds a nearly-drowned man washed up on shore. Another survivor, this time from a boat wreck. With only meager survival skills between them, will they survive and can they find love?

Hi, my name is Janice Seagraves.

Someone recently asked me why I decided to write. I gave the usual flippant answer that the characters in my head wouldn’t leave me alone. Which to be honest is more or less true.

But actually I blame my insomnia.

As far back as I can remember I’ve had trouble falling asleep. My own grandmother used to say that I sleep less than any baby she knew, and Grandma was a mother of eight.

At a very young age I started making up stories to pass the time. I’d close my eyes and imagine I was someone else having an adventure.

The “what happened next” had started innocently enough. My parents had taken my sister and me out to a movie. On the drive home, I asked my mom, “What happened next.” She told me to make up an ending.

It became a habit with me to think of an alternative ending to a movie that I didn’t like, or one that had a wimpy ending. Or just what happened next.

Then I started to think up brand new stories. I never wrote any of these down, but I would draw pictures.

Hey, I was young and truthfully I didn’t have a lot of faith in my grammar or spelling.

I finally started to write when I was twenty years old. The stories in my head had started to grow and I had to write them down just to remember them all. I’ve written short stories to larger pieces over the years, all having to do with the question: what happened next.

Then about eleven years ago I tried to take a class in accounting, but my daughter started to have trouble in school. My hubby and I decided I was still needed at home. Giving up the class wasn’t a problem. Apparently I don’t have “the right stuff” to be an accountant. Go figure.

Then I got the bright idea to start to write seriously toward publication.

I started to study the craft of writing. It was hard at first, because I hadn’t so much as taken a writing course. So I bought several books and got a couple of subscriptions to writing magazines. Then I took a correspondence course.

Later I finally got online and the whole world opened up for me. I got a blog, joined writing groups, writer’s forums, took (yippee) workshops and made friends with other writers.

Someone suggest I join a new group called Avoid Writer’s Hell, started by Faith Bicknell-Brown. The owner had written four books with the same title as the group, to help writers. (Sadly, the group no longer exists, but the books with Faith’s invaluable advice are still available.)

I learned so much from this group and had so much encouragement that I finally entered a writing contest. It was for a cover that I thought would fit a manuscript that I had wrote the year before, called Windswept Shores. It’s about what happened next after a terrible plane crash.

To my surprise I not only won, but I was also offered a contract.

If she had to spend one more day on this godforsaken island, she’d go stark raving mad. The thought spurred Megan into rolling a large log with one foot then the other, until it was near the bonfire. “God, this thing is heavy.” With a grunt, she lifted one end until it teetered upright then gave it a shove. It landed in the fire, embers swirling in the air.

Breathing hard, she flicked a glance at the teal-colored sea. She’d thought a vacation to the Bahamas would be the perfect getaway, would be a solution to the problems she and Jonathan had faced. She’d been wrong—dead wrong. Tears of grief filled her eyes. The never-ending crash of the waves on the beach and the cries of the seagulls seemed to mock her with the reminder she was utterly alone.

She’d felt like a tiny speck of sand last night when a violent storm had swept across the island. It had made a mess of her meager campsite, which had taken all morning to fix, and had demolished her seaweed SOS sign. She’ll have to recreate her SOS. Sighing, Megan trudged toward a pile of kelp. As she got closer, she saw a figure wearing blue jeans and a t-shirt. Her stomach lurched.

Oh, God, it’s another body washed up from the plane wreck. That would be number twelve. As always, she couldn’t help but wonder if the next one would be Jonathan. He hadn’t been wearing jeans on the plane, so she knew she’d been spared seeing his corpse this time. Thank God. She approached the body with dread. Tightening her resolve, she knelt. Suddenly the “dead body” coughed and rolled over. With a scream, Megan jumped back. She clutched her chest and pressed a shaking hand to her mouth.

Biting her lip, she stared down at the still-breathing man. His drenched t-shirt molded against his broad shoulders and well developed upper body. Short, golden brown hair stuck out in all directions.

Megan, get control of yourself. Don’t wet your pants the first time you finally see a living person. She got on her knees, plucked the seaweed from him and wiped the sand from his face. His day-old whiskers scratched her palm. Reddened skin stretched across both cheekbones and over the bridge of his nose. Her thumb caressed his parched full bottom lip.

She patted the side of his face. “Hey, are you okay?” That’s a dumb question. He isn’t okay.

“Hello there.” She hated the sound of her voice. It sounded rusty, unused.

Abruptly he rolled away from her to heave onto the sand, making a loud, ugly retching noise.

He wiped his mouth with the back of his hand, then looked at her. “Sorry, mate, I swallowed too much sea.” His gaze went over her shoulder in the direction of the bonfire which crackled and popped not far from them. “Mite big for a barbie.”

Sitting back on her heels with her hands folded in her lap, Megan followed his gaze, then back to him. “My signal fire.”

His accent intrigued her. Was he English or Australian?

“G’darn,” he looked around, “where the bloody hell am I?”

“Don’t know. There’s no one here to ask.” Megan shrugged helplessly, but couldn’t contain her curiosity. “Are you from England?”

“Naw,” he rubbed his eyes, “I hail from Sidney, but my port of call these days is Fort Lauderdale.” He blinked up at her. “You?”

Ah, he’s an Aussie. “I’m Megan Lorry, from Anaheim, California,” she said, barely loud enough to be heard above the sounds of the surf and the roar from the fire. “Are you a survivor of Air Bahamas flight 227, too?”

Megan slipped an arm around him lifting his back off the sand. Turning his head to her hair, he took in a couple of short breaths. Megan pulled back staring at him. “What the—did you just sniff me?”

“Ya smell too good not to.” He grinned, causing his cheeks to dimple. “Name’s Seth Dawson.” Leaning back on one arm, he stretched out his hand to her. She clasped it as if it was just a friendly greeting between strangers back home.

“Me mate’s fishing boat hit a reef during the big squall last night. That’s when I took a tumble ‘T’ over ‘A’ overboard.” He took a deep breath, let it out slow, then glanced up and down the beach. “Somehow I made it here ‘out the back of Burke.’”

“Oh dear, that’s terrible,” she sympathized. Does he mean the middle of nowhere?

“Blimey, I’m weak as a babe.” Seth managed to get to his knees, before stopping to pant. He licked cracked lips. “Megz, do you have any water on ya?”

“Yes, back at my camp. Don’t move. I’ll be right back.” Meg hurried off down the beach.

He called after her, “Where the bloody hell would I be going, eh?” I still reside in the same small California town, where I was born and grew up.

I live in a hundred year old haunted house (not kidding) with my husband of 30 years with our just grown daughter.

We are owned by one cat and two birds. Of the later, one is a handicapped dove and the other a pigeon that is in love with my husband (also not kidding).

I write romance of various genres. My first book, which is a contemporary romance, called Windswept shores, came out in June 2010.