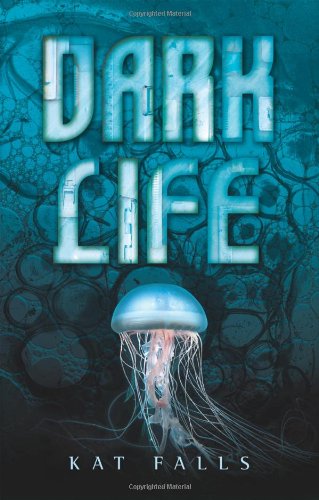 A few weeks ago, I signed up to win Dark Life by Kat Falls (couldn’t find a website for her) in a Goodreads giveaway. And wow! I won! 🙂 When it arrived this week, I honestly thought I had a brain fart when I entered. The reason? I’ve made it a habit over the past months to only enter giveaways for books I really want and plan to read. Here’s the thing. After I opened to the inside cover and barely skimmed the blurb, and I swore it’s the first time I’d seen it. Plus, I’m not an underwater fan. The only rational explanation I have is the giveaway must have mentioned something about dystopia, which I’m just starting to get into after reading the Hunger Games series. Ramble, ramble, the blurb from Goodreads:

Set in an apocalyptic future where rising oceans have swallowed up entire regions and people live packed like sardines on the dry land left, DARK LIFE is the harrowing tale of underwater pioneers who have carved out a life for themselves in the harsh deep-sea environment, farming the seafloor in exchange for the land deed.

The story follows Ty, who has lived his whole life on his family’s homestead and has dreams of claiming his own stake when he turns eighteen. But when outlaws’ attacks on government supply ships and settlements threaten to destroy the underwater territory, Ty finds himself in a fight to stop the outlaws and save the only home he has ever known.

Joined by a girl from the Topside who has come subsea to look for her prospector brother, Ty ventures into the frontier’s rough underworld and begins to discover some dark secrets to Dark Life.

As Ty gets closer to the truth, he discovers that the outlaws may not be the bloodthirsty criminals the government has portrayed them as. And that the government abandoning the territory might be the best thing for everyone, especially for someone like Ty, someone with a Dark Gift.

The novel plopped me in the middle of nowhere. I was afraid it would be one of those books full of random events which would leave me lost. Thank goodness, it wasn’t. By the end of chapter one, everything had smoothed out, and I was totally on board.

An underwater adventure. Like I said, the setting wasn’t my typical read. However, Ms. Falls did an glacial job with the world building. It didn’t take long for my misgivings about the watery world setting to evaporate. I could almost picture a community under the sea. How I would love to visit a place like that, even if freaky things did happen to my brain because of it. 🙂

The story was told entirely from Ty’s perspective, a teenage boy, living at the bottom of the ocean with his family. For the most party, I liked Ty. He was practical and water  smart, yet still fallible. I also had a bit of child recklessness in him. Not the crazy risk-taking like he was a superhero, but rather the kind I remember as a child–it’s not too bad if I don’t get caught and my parents are overreacting about the dangers.

Gemma was the supporting actress in Dark Life. The girl had quite a bit of spunk, which I loved. Where Ty was responsible, she was rash–100%. The only thing which gave her pause was occasional doses of fear. Even then, she wouldn’t let fear keep her from accomplishing her goals. I do have to say, my girl wasn’t the brightest crayon in the box, and did her share of stupid thing, dragging Ty along for the ride. She was still a fun character though.

Plot wise, we had two going–Gemma’s missing brother and saving the underwater ranches. Ms. Falls was awesome about weaving these two pieces together to form a big picture at the end. The only complaint I had is about the deep POV. As you all know if you keep up with my reviews, I hate being left in the dark when inside a character’s head. There was a lot of that going on when it came to the “Dark Gifts.” I knew Ty had one, as well as his sister, early in the novel. Yet the big reveal didn’t occur until after the halfway mark. On one hand, I could see why Ms. Falls wanted to keep the info as a surprise. On the other, not knowing what the main character knows kind detracts from the POV, but that’s just me. Others may feel differently.

For parents looking for a safe book for your tween or teenager, I’d recommend this one. It had romantic elements which were sweet, and age appropriate behavior for youngsters. I certainly plan on passing this one on to my 13-year-old. There was a bit of violence which drew a sympathy wince or two. Of course, I’m a baby about pain.

Do I want more? You betcha! I’m looking forward to Rip Tide which comes out this August.

Dark Life by Kat Falls is available at: