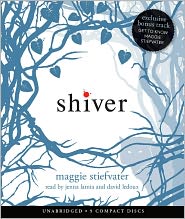 I mentioned my Pandigital Novel (see review here and here) about a month ago and how it’s great for free reads such as samples. Well, after all the “Shiver” hype, I decided to download a sample from Barnes & Nobles. I’ll be honest, the first few pages seemed a little slow, but the premises seemed interesting enough for me to give it a shot. So I ordered the book. When it arrived, Catching Fire by Suzanne Collins arrived the same day (see review here). As great as the Hunger Games (see review here) was, I had HAD to dig into Catching Fire. I passed Shiver by Maggie Stiefvater on to my daughter and set a deadline for the both of us since she was eager to get into Catching Fire also. One week, then we’d switch books. Previously, Daughter girl said the Hunger Games was the best book she’d read that year. She finished shiver and said it was right up there with Hunger Games. Keep in mind, we don’t always share the same taste. Before I get into my review, the teaser from Ms. Stiefvater‘s website:

For years, Grace has watched the wolves in the woods behind her house. One yellow-eyed wolf—her wolf—is a chilling presence she can’t seem to live without. Meanwhile, Sam has lived two lives: In winter, the frozen woods, the protection of the pack, and the silent company of a fearless girl.

There was a lot to like about Shiver. Not one of my favorites, but definitely a decent read.

Grace was an interesting character. My first impression was she acted too grown up for a seventeen year old. It took me a while to warm up to her because of it. (tee hee…did you catch my pun? “warm up” Okay that was lame. Moving on.) It wasn’t until later when her situation became apparent that her personality began to fit in my mind. Sometimes experiences do make children grow up a little fast. Sad, but true. Truly Grace was aged before her time.

Certainly Sam was an important character. Even though he had his own POV in the story, for some reason he just didn’t seem to take lead as I’d expect a main character to do. He seemed to play second fiddle to Grace. Not sure if this is what Ms. Stiefvater intended when she wrote the two POVs, but that’s how it played out to me. And it was certainly okay in my mind. A lot of romances are like that, with the female having more of a presence than the male. I wasn’t bothered, it just an impression which stayed with me. If I could put some adjectives to Sam’s name they would be Loyal, Chivalrous, Persevering.

So, I’m looking at my earlier notes and found I had a lot of questions at the beginning of the novel. The answers were answered later in the book, but I remember being very confused early on and asking the question “what are the rules?” I didn’t like the vagueness. In truth, I believe it was a main reason I had such a difficult time investing in the novel. It wasn’t until the rules about transformation and such became concrete that I was able to really get into the book. In a way, I guess it was fitting since Grace didn’t really know all the rules herself. Sam certainly was more familiar, but he wasn’t keeping me privy to all the hush, hush secrets about lycanthropy.

One of the things I found fascinating was Grace and Sam’s relationship. They reminded me of an old married couple many times in their mannerisms. They seemed comfortable with each other. It was almost as if they’d spent the last six years in each others company and not just a few weeks (or whatever the time period was). It was odd to see their relationship at that maturity level when really everything was so fresh to them.

That Grace was the sexually assertive one, also surprised me. 🙂 Even though I’m a prude and want all children to wait before engaging in sex, I found this novel modern in its presentation. Like many YA shows (Kyle KY, Vampire Diaries, Smallville, Pretty Little Liars), teens are doing the “deed.” It saddens me so little thought goes into sharing an experience which should be special. Yes, quite a few teens are having sex, and Ms. Stiefvater didn’t put anything on the table which wasn’t already there. I’d be naive to think they weren’t. And it’d also be silly to think the heavy petting and spit exchange wasn’t a common occurrence amongst some teens. I was a kid once too, despite my archaic mentality. 🙂 I just hope I’ve talked to my kids enough about the emotional side of sex that they know when the time come it should be a special for them and not something to give away lightly, regardless of the way the media portrays it. Like I said. 🙂 I’m a prude despite my fondness for writing and reading erotic literature and talking about sex in general.

Now keep in mind, I just started reading the YA genre this year as an adult. I’m told this genre can incorporate a lot of adult issues while remaining YA. I think Shiver has one foot planted in the YA world, while crossing into the adult mentality. End the end, I have to say Ms. Stiefvater did an excellent job. Cause really, isn’t that what it’s like being a teen? Not quite a child, but definitely not a adult. The in between.

Shiver ended rather abruptly. I certainly wasn’t ready for the ending and neither was my daughter. After she finished Shiver she came to me with the same thoughts. The story didn’t quite seem finished. Well, I mentioned in an earlier post that I won Linger from Arena (The Nerd’s Wife Blog). So now I just have to wait until my daughter finishes hording it. I’m certainly looking forward to it.

So before I wrap up, a few favorite lines:

I purchased my copy of Shiver at the Book Depository! Okay. I’ve got it bad. I used to order just a couple of books at a time. Devour them, then head back to the book store. Something’s happened to me though. It’s like I can’t get enough of books. I’ve taken to just shoving them in boxes as they come in, cause I know I can’t get to them as soon as I want. There are just TOO MANY of them!!! And they just keep coming and coming and coming. I think it has something to do with my constant ordering. I’m afraid I might need help. Anyone know of a Books Anonymous club I might join?

Well, until then, allow me to share the most recent books to my collection. About a month ago, I was the fifth winner of a Bloody Bookaholics‘ giveaway and had a choice of several books. One of Jeaniene Frost’s books was amongst the selection. Thing was, I I was an Young Adult (YA) kick at the time. So I skipped this selection since it seemed like my typical reads, Paranormal Romance (PR). Later, someone mentioned what a great series this was, and it’s been on my mind ever since. Anyway, I mentioned in an earlier post I received a Pandigital Novel (post here). So instead of blindly ordering novels from my reading list, I decided to read some samples on my e-Reader first. Halfway to the Grave passed the test and went in my shopping cart. Next up! I finally got tired of everyone talking about this book and being left out of the loop! Again, I picked up my usually trusty Pandigital Novel and read a sample. I’ll be honest. If this were an adult PR, I might not have made the purchase. The first few chapters were intriguing, but not to the point it jumped right out at me. The saving point was that it was YA which I’m craving these days. Currently, my daughter is reading it and enjoying it. She tells me it’s interesting enough to keep her attention, but not the best book she’s read this year, which currently happens to be Hunger Game, which also happens to be my current favorite of the year. The review on that tasty treat will be available this coming Monday. And that leads to my most recent acquisition! Yes! Just thinking about this book makes me sigh. Catching Fire is the sequel to Hunger Games. I immediately ordered it after finishing Hunger Games. It was that good! Yes, I used the Pandigital Novel to read a sample. Not because I wasn’t sure about it, but rather because I COULD NOT WAIT!!!!! Now, I’ve been tasked to read this novel before Sunday so my daughter can take it with her to my mother’s house. Americans, you may notice the cover is different from your US version. Why is that? Well, I ordered all these from the Book Depository which allowed me to choose between the UK and US cover even though I live in the hot and humid state of North Carolina.

Anyway, I need to start reading Catching Fire. I’ve been stroking it off and on while typing this post and find myself getting strangely aroused. The whole thing is odd and starting to creep me out.

If no one’s let you in on it yet, The Book Depository is having a birthday coupon thingie. 10% off your order. The offer is good until August 31, 2010. If you’re interested in receiving one either send me an email at reenajacobs@reenajacobs.com or leave a comment. I’d be happy to send you coupon love.