It seems like forever since I’ve done my last mailbox post. Like a good girl, I’ve slowed down on purchases. Yay me! The first two books I believe I preordered, so even that’s kind of good, right? So, let’s see what goodies we have. 🙂

Like I said, this was a preorder. Nalini Singh’s Psi/Changeling series used to be on my instant buy list. Then came the Guild Hunter, which turned into an instant buy also. Only the third in the series, I’m hoping for a winner here. Hopefully her next Guild Hunter book will be an auto-purchase also. But we’ll see.

Next up, Dreams of a Dark Warrior. Kresley Cole has NEVER let me down, and I’m hoping for greatness with this work also. I’m in the middle of Meljean Brook’s Iron Duke, but this book is definitely next. Kresley Cole is one of those authors who currently has a place at the top of my to-read list no matter what’s on my plate. Yes, she’s that good, and I highly recommend her. I’m such a pessimist and keep expecting her to blow it, but she continues to draw me in with each story. Way to go, Ms. Cole!

This round I also received a couple of complimentary copies from authors. Woot!

Last month I read Space Junque (review here). It was my first space opera, and I rather enjoyed it. I was pretty lucky Ms. Rigel offered her next novella to me. I had quite a few questions after the first novella and knew Space Junque was only the tip of the iceberg. Beautiful artwork, don’t you think? It’s been forever since I’d read a thriller. I used to be really into them, Dean Koontz, Stephen King, Peter Straub… then the I started having nightmares. When I read the blurb for Reunion it really drew me, in a sick twisted, I’m asking for trouble kind of way. 🙂 Reunion doesn’t release until May 1, so hopefully I’ll have time to build up my courage. Wish me pleasant dreams. Yikes!

So a few weeks ago I read Here There Be Monsters by Meljean Brook (see review here) and loved it! I was quite impressed with the book considering it was the last one and Ms. Brook’s name had the smallest type. Great start (or ending as the case may be), so I was sure to receive great entries from the other authors. Now I originally purchased this anthology because I’m a Nalini Singh fan. She sort of fell out of favor with her last psi-changeling novel, but oh well. 🙂 Whisper of Sin was another chance for her. Before I get into the review, a quick blurb from Ms. Singh’s website:

“Whisper of Sin” features Ria, who, as Lucas’s executive assistant, has appeared in a number of previous books in the series including Slave to Sensation and Mine to Possess. This novella is set back in time, and tells the story of how Ria met her changeling mate, Emmett, and became part of DarkRiver. It also shows us another glimpse of DarkRiver’s past.

Honestly, it’d been so long since I’d read a Psi-Changeling novel, I wasn’t sure who Ria and Emmett were. No matter, 🙂 I could still enjoy the story. The storyline started interesting enough, though I wasn’t sure if Ria was human for the longest time. As I said, it’d been a while.

The character development was decent. Ria and Emmett were likable folks. Honestly, I don’t have much to stay about them. They didn’t stand out as overly unique.

As far as the plot goes, well… I’d say it was one of the weakest story lines in the Psi-Changeling series, in my opinion. However, I liked it better than her prior novel, Blaze of Memory. So what was the issue with it? The stakes were rather weak. I remember reading on Ms. Singh’s website once something to the effect, think of the worst thing which could happen to your character, then do it to them. Well, nothing bad happened. There were no significant wedges driving the lovely couple apart. The fight scene was given as back story.

I’m a little apprehensive about purchasing Bonds of Justice at the moment, which came out in July 2010. Anyone boasting about it as a gotta read? 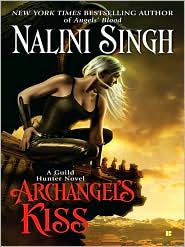 I was lucky enough to win Archangel’s Kiss by Nalini Singh in a giveaway hosted by JoJo’s Book Corner. Now I’m a big fan of Nalini Singh but have been putting off this book for quite some time. I had a bit of trouble connecting with the characters in Blaze of Memory (review here), which made me a little leery of this book, and typically read series which have different couples each novel. The combination was a bit offsetting. After passing the novel over one too many times, I finally settled down for a read. So the teaser from Ms. Singh’s website:

Vampire hunter Elena Deveraux wakes from a year-long coma to find herself changed—an angel with wings the colors of midnight and dawn—but her fragile body needs time to heal before she can take flight. Her lover, the stunningly dangerous archangel Raphael, is used to being in control—even when it comes to the woman he considers his own. But Elena has never done well with authority…

They’ve barely begun to understand each other when Raphael receives an invitation to a ball from the archangel Lijuan. To refuse would be a sign of fatal weakness, so Raphael must ready Elena for the flight to Beijing—and to the nightmare that awaits them there. Ancient and without conscience, Lijuan holds a power that lies with the dead. And she has organized the most perfect and most vicious of welcomes for Elena…

Well, it turns out, my misgivings were unfounded. 🙂 I enjoyed this book. Oops, I guess I shouldn’t have saved that declaration until the end. Too late now.

First up, Raphael. I started off disliking the prick. I wanted to plant my fist in his mouth so many times in the beginning. Things he said to Elena like “You’re no more my equal now than you were before I Made you immortal” and “You can call me ‘Master'” had me spitting mad. It’s one thing for others to treat her like she’s nothing more than a pet to Raphael, another for the bean head to support that belief. GRRR! I’m not sure when, why, or how, but somewhere along the lines his personality tempered. Instead of treating Elena like a child, he encouraged her to be strong and mask her weaknesses. Though Raphael presented a strong front to all, even in his mind, I couldn’t help but feel sorry for him. The idea of never being able to show weakness less those around you attack seemed like such a horrible existence. Everyone needs peace from time to time. I hope in the next novel he gets an opportunity to experience and truly relax.

Elena, on the other hand, was forever strong and determined. She refused to let others tear her down, not even Raphael with his snide comments. Despite being tormented by her past, she knew who she was–the hunter-born, brave even when deathly afraid. I loved her strength and willingness to confront her fears. For Elena, the book was also about revelations. It gave insight to her past–a past she’d repressed because it was too painful to bear. As Elena said, “Some secrets hurt too much.” <sigh>

As to the story line, there were some areas I liked and some I liked not so much. The mystery I really enjoyed. So much speculation, I was never quite sure whodunit until the villain stepped up to the plate and said, Idunit! The archangel politics also had me intrigued. Ms. Singh presents the angels as inhuman creatures, it makes me wonder where they came from. Elena and Raphael had a lot of sexual chemistry. Ms. Singh really made it shine. However, it brings up a matter I didn’t understand and didn’t like. Raphael constant denied Elena sexually because apparently her body was too weak for the event. That was just odd. How can a body be too feeble for sex but strong enough for combat training? I didn’t get it. When they finally got around to doing the deed it left me with the thought “What’s the big deal?” Anyway, I just felt like it was false sexual tension and unnecessary.

This is more of a nitpick thing, but I wondered why the color of Raphael’s eyes were constantly mentioned. It got to the point I mentally screamed, okay already! I know he has blue eyes. I get it!

Now for an episode of cool lines I liked in the novel:

Reading this book has rekindled my passion for Ms. Singh’s novels. I’m looking forward to her newest release which came out a couple of days ago.