If you’ve been following the Talisman of El blog tour, welcome and I hope you’ve been enjoying yourself. 🙂 If the Talisman of El is new to you, also welcome, I’m happy to introduce you to a new author–Alecia Stone! Today she’s here to do an interview with us, so here’s your chance to learn a bit about her and her works. Reena Jacobs: I read the blurb. I cruised your blog. I watched the trailer. Wow! There’s so much happening in Talisman of El, I want to start everywhere. 🙂 Please tell the readers a little about your book first, cause I’m anxious to ask some questions. 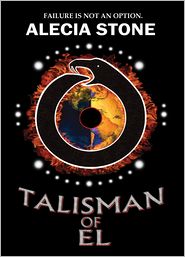 Alecia Stone: First, I’d like to thank Reena for having me today. My debut novel, Talisman Of El, is a story about 14-year-old Charlie Blake who discovers a shocking truth about himself and the world he lives in, which turns his life upside down – literally. Charlie has never quite been able to fit in anywhere, but when he moves to a new town, he encounters a world he knew nothing about but is so much a part of. Talisman Of El is a story about acceptance, identity, and the battle of good vs. evil.

RJ: Without giving too much away, will you give us some insight into the idea of one planet, two worlds?

AS: Well, I’ve always been fascinated with the supernatural world, so anything strange that occurred which couldn’t be explained, I’d put it down to the world of the unseen. From the moment I realised Charlie wasn’t your average kid, I knew there would have to be an explanation for what was happening to him and why – an explanation that was beyond the ordinary. For some unknown reason, I started thinking about people who had vanished without a trace, like Amelia Earhart, for instance. Then I came across this article about a farmer who vanished into thin air in front of his two kids. So, I thought to myself, they had to have disappeared to somewhere. And there you have it. One planet, two worlds.

RJ: Oh! I like that. Your bio talks about your experience in film and television. Did you have any involvement in putting together the trailer?

AS: Yes, I had about fifty percent involvement in putting the trailer together. I have a degree in Film and Television, so the skills I acquired on my course came in very handy.

RJ: Pretty cool to be able to put your skills to work in a different field. Totally random question. Your website mentioned you’re reading the Hunger Games Trilogy by Suzanne Collins next. I also noticed you have the Time Traveller’s Wife by Audrey Niffenegger as recommended reading. Does watching the movie get you interested in reading a book or is it the other way around? And why?

AS: I finished The Hunger Games series, by the way. I’m a huge film fanatic (having a degree on the subject should be a clear indication) but I must say that watching a movie adaptation does not get me interested in reading a book. I tend not to read a book if I’ve watched the movie as I already know what to expect so it kills the suspense.

RJ: I totally know what you mean. I’m the same way. 🙂 I purchased the Time Traveler’s Wife after watching the movie, yet I haven’t even cracked it. haha So, what are you working on now?

AS: Right now, I’m working on the sequel to Talisman Of El.

RJ: Definitely something to look forward to. Do you have any advice for other writers?

AS: For any writer coming into this industry, I would say you need to develop a thick skin. Believe in yourself and in your work. Right now, you are your biggest fan, so love what you’re doing. Also, just have fun.

RJ: Thanks a bundle for stopping by and sharing with us, Alecia. We wish you the best!

Alecia Stone has been in love with anything and everything paranormal for many years. She grad­u­ated with a BA in Film & TV and has worked in tele­vi­sion for a short period of time before branch­ing out into storytelling. When she isn’t writ­ing, she enjoys going to the movies, lis­ten­ing to music, and travelling. Talisman Of El is her first novel. She currently lives in England, UK.

WHAT IF YOUR WHOLE LIFE WAS A LIE?

When 14-year-old Char­lie Blake wakes up sweat­ing and gasp­ing for air in the mid­dle of the night, he knows it is hap­pen­ing again. This time he wit­nesses a bru­tal mur­der. He’s afraid to tell any­one. No one would believe him … because it was a dream. Just like the one he had four years ago – the day before his dad died.

Char­lie doesn’t know why this is hap­pen­ing. He would give any­thing to have an ordi­nary life. The prob­lem: he doesn’t belong in the world he knows as home.

He belongs with the others.