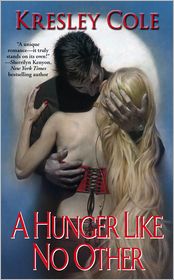 I’ve never done a giveaway before, so bear with me. Kresley Cole is one of my favorite authors, and I want to share her with you. Start at the beginning of her Immortals After Dark series. Okay, almost the beginning. Ms. Cole also has a short story in the Playing Easy to Get Anthology. Definitely check it out. 🙂

For this contest I’m giving away a very gently used but never read copy of A Hunger Like No Other by Kresley Cole. What do you mean by “gently used but never read?” I’m glad you asked. I have no idea how I heard about Kresley Cole. However, I accidentally double ordered this book from Amazon when I decided to try her way back when. This book has traveled around my house looking for a home, but settling as decoration. I could probably stick it back on the store shelf and no one would know the difference. Would you like to give it a home? Well enter this contest.

To tempt you, the teaser from Ms. Cole’s website:

A mythic warrior who’ll stop at nothing to possess her…

After enduring years of torture from the vampire Horde, Lachlain MacRieve, leader of the Lykae Clan, is enraged to find the predestined mate he’s waited millennia for is a vampire. Or partly one. This Emmaline is a small, ethereal half Valkyrie/half vampire, who somehow begins to soothe the fury burning within him.

A vampire captured by her wildest fantasy…

Sheltered Emmaline Troy finally sets out to uncover the truth about her deceased parents–until a powerful Lykae claims her as his mate and forces her back to his ancestral Scottish castle. There, her fear of the Lykae–and their notorious dark desire–ebb as he begins a slow, wicked seduction to sate her own dark cravings.

An all consuming desire…

Yet when an ancient evil from her past resurfaces, will their desire deepen into a love that can bring a proud warrior to his knees and turn a gentle beauty into the fighter she was born to be…?

But wait you say! I’m an old fan of Kresley Cole and well beyond the first book. No problem. Check back next Tuesday, April 27, 2010 for the next drawing.  I ordered two copies of “Pleasure of a Dark Prince”–one for me and another for some lucky winner!

To enter, I only need a few things from you. If you win, I’ll be in contact with you for delivery details.

So if you enter this contest you should end up with between 1-3 entries. I have a hard time counting higher. 🙂