When the zombies arrive will you be ready or will you join the ranks of the undead? Welcome to the next stop on the Zombie Apocalypse Preparation Blog Tour.

We have David Houchins & Scot Thomas with us today. If you want to survive the Zombie Apocalypse, I suggest you pay attention. 🙂

Reena Jacobs: You mention a million and one writers in your foreword. If you had to survive the Zombie Apocalypse on a deserted island and could only bring the works of one author, who would it be?

David Houchins/Scot Thomas: Well, since we only mentioned a pair of writers, of the two mentioned, I’d take King.  Reading the same two books would get boring.  Chuck Palahniuk would be another choice, but his work’s not for everyone.  Tom Robbins also stands as a contender.  How did we end up on this island?  I mean, if you’re planning a vacation you should be able to bring what you want, and if you’re stranded somewhere, it doesn’t seem likely that you’re just going to happen to have an author’s entire body of work along with you.  That being said, if I were to plan something like this and had the long term knowledge, I’d kidnap all three and make my own human-author-centipede to create the ultimate storytelling machine.  I’d be its agent and we’d conquer the island, and then, the world.

RJ: Here’s crossing our fingers there’ll be something worth conquering after the zombie apocalypse. 🙂 I’m told you grew up as poor black kids on another planet before reincarnating as white redneck children on earth. What was your happiest memory before Fuckyermomma’s big explosion?

DH/ST: Setting the charges.  Trust me, the place deserved it.

RJ: Okay… now you’ve got me wondering if Earth will be next. What’s surprised you most about humans and the human culture?

DH/ST: Mostly the fact that they haven’t become aware that they’re subjected to the mind-numbing torture that is reality television.  An intelligent populace would realize that it’s intellect-killing garbage and violently retaliate against those that try to force them to view its awful jackassery on a daily basis.

RJ: Okay… let’s just move on and pretend I didn’t spend hours and hours watching television yesterday. How much of you/your life do you put into your stories?

DH/ST: I don’t think it’s possible to leave yourself out of a written work.  What you like, dislike, want, fear or whatever, it’s going to spill out in some way shape or form.   Being that this was more of an instructional piece laid out in our combined unique style, it was so loaded with our brand of wit that it should be handled only with latex gloves.

RJ: Give us a brief description of a story you have hidden in your crypt of rotting corpses? And will it ever see the light of day?

DH/ST: There’s a guy who does a thing in a place which leads to stuff.  Also, boobies.

RJ: Tee hee… he said boobies. Do you have any advice for other writers?

DH/ST: Write, share your work with those that won’t heap undue praise on you for mediocre work.  I was hesitant at first to show what we’d done to my wife thinking that she’d have nothing but good things to say.  After the first hour, she sent me back the file (she was reading it at work, it was a slow day) and it had so much figurative red ink on it that I thought I was back in school.  She pointed out that some things didn’t make sense, out of place words, misspellings, and unnecessary hate speech.  She was our first line of editing after that and she helped immensely.

Having someone like that is invaluable.  If you lack that kind of creative feedback, well, keep writing, if you can re-read what you’ve put down and surprise and amuse yourself, it’s probably not all shit.

RJ: Anything special you’d like to say to readers? What about to the undead?

DH/ST: We’re nearing 70,000 fans now, we’ve gained gained around 50,000 since we started the first book, and they keep coming in and being supportive on a daily basis.  We wouldn’t be doing this without them.  Those who have read the book, by all means, keep it handy.  It may prove useful someday, possibly as toilet paper, but that’s still a use. Also, keep a look out for updates on our future work and keep reading the page.  As far as the undead, well, invest in a helmet.  It won’t save you, but it’ll make us swing twice. 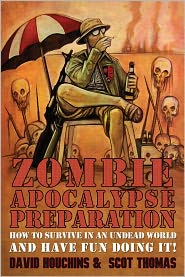 “We guarantee this is the only tool you need to survive the zombie.

OK, that’s not really true. But when the SHTF you’re going to want a survival guide that’s not just geared toward day-to-day survival. You’ll need one that addresses the essential skills for true nourishment of the human spirit. Living through the end of the world isn’t worth a damn unless you can enjoy yourself in any way you want. (Except, of course, for anything having to do with abuse. We could never condone such things. At least the publisher’s lawyers say we can’t”

Zombie Apocalypse Preparation: How to Survive in an Undead World and Have Fun Doing It! is the first zombie apocalypse survival manual with entertainment in mind.  What fun is living in a world of the undead if you can’t have a bit of fun?  The apocalypse is not just about survival it’s about enjoying your new found life.

Inside the covers of this book you will not only find the way to pick the right weapon, building, and survival methods but you’ll find entertaining ways to dispose of the undead, entertain yourself and your group, and dispatch your former friends and family members with a smile on your face and a song in your heart.

David Houchins was born in Toledo, OH in 1978.  He was raised in the city of Houston, TX, and now resides in deep South Texas.  His hobby of giving his farts exotic names and personalities led to his passion for writing.  He is armed and considered extremely dangerous.

Scot Thomas: Born Austin, Texas in 1973.  Grew up in Corpus Christi, TX until the age of 19 when he joined the U.S. Navy.  After four years in some of the most inhospitable climates on earth he left the Navy for a job in the South Texas oil fields.  Several years later he landed in Broadcast news.  Scot has won several awards for his work as a producer.  Scot has always had a sense of humor and desire to make people laugh.  On January 16, 2010 he and David Houchins founded Zombie Apocalypse Preparation on Facebook.  The page now has more than 65,000 fans and is updated every day.  The page slowly turned into the first book on survival in the zombie apocalypse all while smiling.  Houchins and Thomas are currently working on the second book and have plans for a few other projects.

Don’t miss the rest of the blog tour